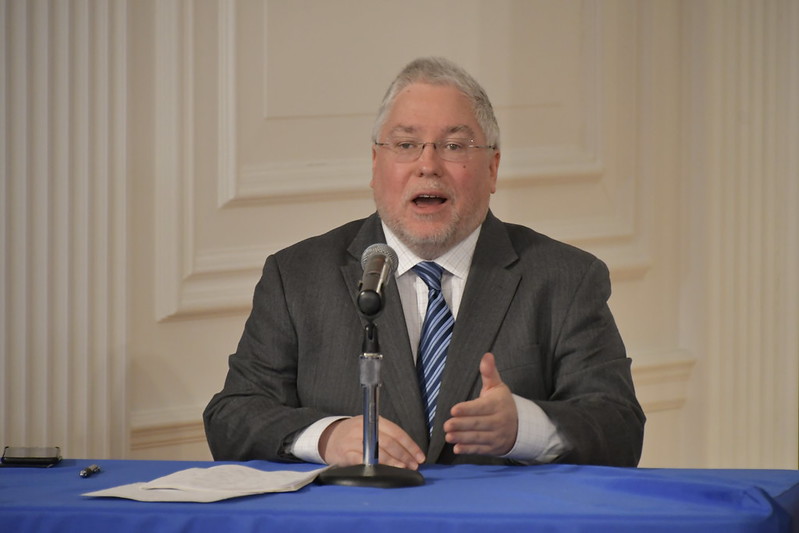 Morrisey joins push to let states use federal relief to offset tax cuts if they choose By March 16, 2021 - 8:49 pm Attorney General Patrick Morrisey appears at a news conference in the Governor's Reception Room in April 2020. West Virginias Attorney General and others want clarity on whether a provision in the most recent covid relief package really would restrict states from taking millions of federal dollars while also cutting taxes. Federal spending power has clear limitations, stated West Virginia Attorney General Patrick Morrisey, whose office released an announcementTuesday afternoon. Congress may not micromanage a states fiscal policies in violation of anti-commandeering principles nor coerce a state into forfeiting one of its core constitutional functions in exchange for a large check from the federal government. Such economic dragooning of the states cannot withstand constitutional scrutiny. The Attorneys General from 21 states sent a letterto U.S. Treasury Secretary Janet Yellen arguing that, absent an interpretation by her department, the legislation almost certainly is an unconstitutional intrusion on state sovereignty. Treasury interprets the federal law and makes the rules for recipients of the federal relief to follow. The recent $1.9 trillion federal relief package includes restrictions saying states cant use the money to directly or indirectly offset reductions in net tax revenue. This comes at a moment when Justice has talked up a big federal relief package. And, also when he is touting a big state income tax cut. Earlier this month, Justice took umbrage at the restriction. He blamed U.S. Senator Joe Manchin. Gov. Jim Justice Its all about just petty nothing, Justice said.Thats the only reason that got written in there. The provision seems to have developed when a group of U.S. senators grew concerned that some states could cut local taxes rather than spend coming federal relief on needs related to the coronavirus pandemic. We could distribute billions to the states, and they turn around and lower taxes there are governors talking about that, and its not the point here there should be a prohibition against voluntarily diminishing revenues, Sen. Angus King, I-Maine, told The Washington Post. The coming package, the American Rescue Plan, includes $350 billion in direct aid to state and city governments. West Virginia is lined up to receive another $1.259 billion. States and local governments may use the coming federal funding to cover revenue losses and for water, sewer and broadband. The money cannot be used for tax cuts, shoring up pensions, making deposits into rainy day funds or for non-pandemic related expenditures beyond state revenue losses: A State or territory shall not use the funds provided under this section or transferred pursuant to section 603(c)(4) to either directly or indirectly offset a reduction in the net tax revenue of such State or territory resulting from a change in law, regulation, or administrative interpretation during the covered period that reduces any tax (by providing for a reduction in a rate, a rebate, a deduction, a credit, or otherwise) or delays the imposition of any tax or tax increase. An outline of the governors plan estimates initial personal income tax reductions totaling $1,035,650,000 and rebates totaling $52 million for lower-income residents but also tax increases of $902,600,000 to make up for most of those breaks. As currently structured, the proposal still has a $185 million deficit. Justice has sometimes described using the fruits of federal relief to establish a reserve bucketfor just such an occasion. Its been a few weeks since he described doing so, though. At his State of the State address and in comments after that Justice has talked about the possibility of the federal government forgiving the relief money West Virginia has already allocated toward unemployment, as well ongoing reimbursement for pandemic-related costs. If those were to occur, Justice has proposed setting aside any surplus into a reserve. So, as the governor describes it, the reserve wouldnt come directly from federal relief but it would be built on money flowing to the state as a byproduct of federal relief. Theres one degree of separation. My additional rainy day bucket has nothing and still has nothing in the world to do with taking CARES money and putting it over here in a rainy day bucket that is for tax relief. Nothing at all. Nothing whatsoever, Justice saidin his most recent comments about the idea. But, the governor said, It is our right, as other states, to draw down stimulus money thats been given to us to pay us back for expenditures that we have expended toward covid. If we have just happened to run our states better than other states that are run by Democrats and out of control if, in fact, we have done that, should we not have the options to do with those monies whatever we want to do with those monies that will only help West Virginians and hel