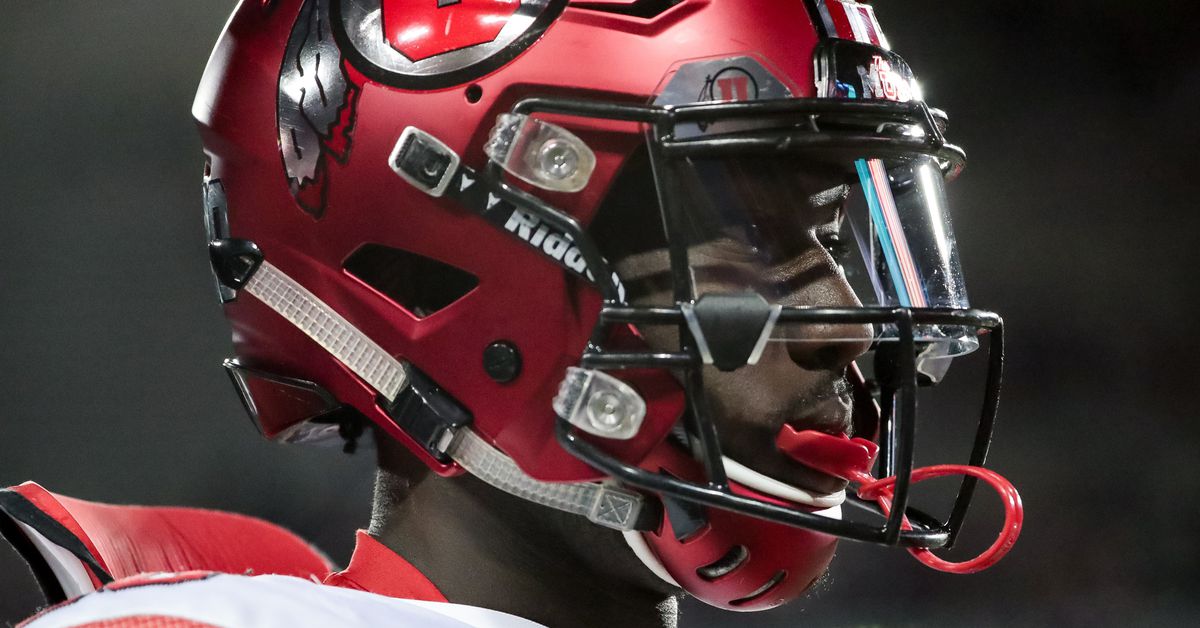 In five games in the pandemic-shortened 2020 season, Lloyd recorded a team-high 48 tackles, 10 tackles-for-loss, two sacks, a forced fumble and a quarterback hurry for the Salt Lake City-based Utes

Utah linebacker Devin Lloyd warms up before game against the Arizona Wildcats at Arizona Stadium in Tucson, Arizona, on Saturday, Nov. 23, 2019. Spenser Heaps, Deseret News Like some of his teammates, Utah middle linebacker Devin Lloydfaced a major decision after the truncated 2020 campaign ended last December. Should he enter his name in the NFL draft? Or should he come back for one more season? Ultimately, Lloyd chose to return to the Utes. So why did he postpone his shot at the NFL? More than anything, I want to leave with a championship, with a nice little ring on my finger. Hopefully a couple of rings, said the 6-foot-3, 232-pound junior. I want to bring everyone along with me, too. I know this team wants to be great. Im not the only one on this team that wants to be great. My passion for the game as well the NFL isnt going anywhere, he continued. I just want to cement a legacy here at the university and do a lot of great things here. I knew I had an opportunity to leave but it wouldnt have been up to my expectations as far as the draft. I just felt like it was all around the best decision to come back and invest another year. More than anything, I want to leave with a championship, with a nice little ring on my finger. Hopefully a couple of rings. Devin Lloyd Utahs coaching staff is, of course, thrilled with Lloyds decision to return. Devin was a leader last year, hes a leader this year. Leaders lead. Theres no drop-off there, said defensive coordinator Morgan Scalley Not only in the backer room but you can see him holding other guys accountable in other position groups. Hes just a guy that gets it. Thats not just calling guys out, its also promoting our culture and when guys are doing things right, give him a pat on the back. I love Devin, guys that are compelling and leading. Its great to have them in the program. In five games in the pandemic-shortened 2020 season, Lloyd recorded a team-high 48 tackles, 10 tackles-for-loss, two sacks, a forced fumble and a quarterback hurry. Lloyd attracted national attention, as he was named one of five finalists for the 2020 Butkus Award emblematic of the nations top collegiate linebacker. Oregon State Beavers quarterback Chance Nolan reaches for the ball after being sacked by Utah linebacker Devin Lloyd during game at Rice-Eccles Stadium in Salt Lake City on Sunday, Dec. 6, 2020. Lloyd weighed leaving for the NFL after last season but ultimately decided to return for the 2021 campaign. Scott G Winterton, Deseret News Hes a talent. Hes got everything you look for in a middle linebacker. Hes 6-foot-3, 235 pounds and runs a 4.5-something 40 and hes a student of the game, coach Kyle Whittinghamsaid of Lloyd last December. Hes got a burning desire to be great. Hes put in the time and the work and the effort ever since he got here and now its paying off for him. This season, Lloyd once again will be counted on to lead a young and talented defense. Its more important than ever. I try to do my best to be an example every day. Those guys work their tails off every day, he said. They make it really easy for me to set the example. They want to learn, they want to get better. It definitely important with a lot of young guys to be a leader. Related Utahs wide receivers room has new face, new voice During the spring, Lloyd is honing his abilities to be a more impactful linebacker. Eliminating all hesitation in my game. Striking and separating, getting off blocks, using my God-given abilities to separate, he said. Making tackles, running through people. Its going to be a fun year for sure. Thats what Im emphasizing in the spring. There was a time when it seemed Lloyd might be a 2021 NFL draft prospect. As he weighed his options, he consulted those he trusts most, including his family and friends. It was definitely a stressful decision, he said. I spent a lot of time thinking about it and making sure I was making the best decision for me and my future. Lloyd also discussed the decision with former Utah players that faced a similar scenario, including linebacker Cody Barton, who now plays for the Seattle Seahawks Related Utah football spring camps five biggest storylines I can remember vividly what Cody said. The way he put it was, Would you rather have somebody give you $1 million right now or $5 million in a year from now? That kind of resonated with me in terms of the investment aspect of it, as far as financially, Lloyd said. Obviously, money is a huge factor as well, aside from just winning. You have to play it smart. From that aspect, that definitely helped me because I was really leaning heavily on coming back. But you have to look at it from all aspects as well. He definitely gave me some advice on seeing the whole perspective, on the field and off the field. Heading into the fall, Lloyd is primed for a big season. The return of Lloyd, and others that have a future in the NFL, is expected to be a boon for the Utes. You always want to have those guys in the program, Sca