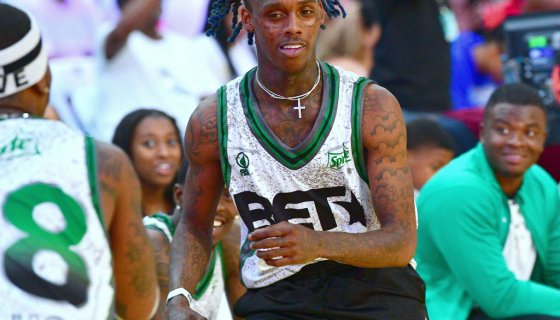 Famous Dex was arrested for gun possession after recently getting robbed at gunpoint.

CLOSE Source: Prince Williams / Getty Famous Dex has been catching all the Ls lately. The troubled rapper just got popped for gun possession after recently getting robbed at gunpoint. Per TMZ , Dex was the passenger in the backseat of a car when it got pulled over by LAPD on Tuesday (March 16) in North Hollywood. The whip got flagged because it didnt have a rear licence plate, but the kicker is the cops say Dex tried to get out and walk away during said traffic stop. After the authorities ran the IDs of everyone, they discovered one of the passengers was on probation. Naturally, cops searched the car and discovered a loaded gun under Dexs seat, allegedly. Dex was promptly arrested and charged with carrying a concealed weapon, which is a felony. Reportedly, his bail was set at $35,000 but Dex is still in the bing. Jail may be the safest place for Dex at the moment. Last week, he told cops he had been liberated of $50,000 and thousands of dollars in cash after getting robbed at gunpoint in the San Fernando Valley, allegedly. To say Dex has had issues over the years is an understatement. Born Dexter Tiewon Gore Jr., the Chicago native did a stint in drug rehabnot too long ago after fans showed concern that he looked particularly strung out. Sadly, he been looking drugged out online for years What also must be mentioned is that social media witnessed Dex put hands on a womanback in 2016. He was again involved in a domestic violence incidentlate last year with an ex-girlfriend. There was also the time he suffered an epileptic seizurein a club a couple of years ago.