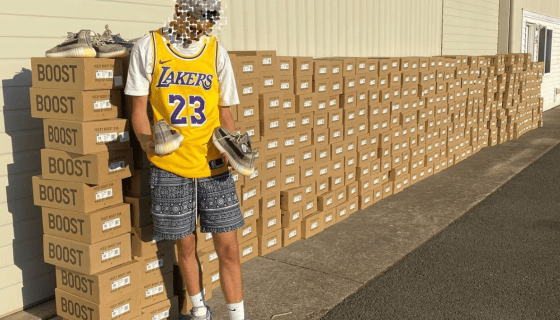 CLOSE Source: @west.coast.streetwear / Instagram Ever since it was revealed that famous sneaker reseller Joe Hebert a.k.a. WestCoast Streetwearwas actually the son of Nikes now former Vice President of North America and SNKRS overseer, Ann Hebert, sneakerheads demanded some kind of retribution from Nike for all the Ls we took at the hands of the Hebert syndicate. Naturally Nikes response to the matter was that they take consumers feelings into account in instances such as this one and are trying their best to satisfy their millions of customers. Unfortunately that doesnt seem to be the case as Input is reporting that Nike did next to nothing when company employees reported Joe Hebert for abusing his family discount code at Nike stores in Portland and Eugene to purchase tons of kicks for less than retail and resell them at marked up prices. Social media has already seen the pics of Heberts mini factory warehouse filled to the brim with boxes of Nikes, Jordans and Yeezys, so we have an idea of just how many sneakers the man was hoarding just to make a profit off his mamas good name. Though Nike said Ann Hebert did disclose that her son was a sneaker reseller in 2018 and they didnt find any conflicts of interests (the sneaker community would disagree), employees felt the higher ups turned a blind eye to all of their concerns in the following years and it sure seems like they have a point. Since 2018, the year Joe Heberts West Coast Streetwear became an official business, sources say he was reported on more than one occasion to Nikes Loss Prevention team, which handles internal matters such as employees (or their family members) abusing benefits like discounts at retail stores. But, sources said that given Joes connection to Ann Hebert then a high-up at Nike employees knew their efforts to stop him from buying shoes to resell were just going to fall on deaf ears. And while sources say he wasnt going into Nike stores and buying shoes in bulk, as his pictures on Instagram show, Hebert was using his family discount for non-personal reasons enough that it raised red flags at Nike stores in Portland and Eugene. Meanwhile lower-tier employees say that Nike holds them to a different standard entirely and are at risk of termination if theyre found to have relationships with sneaker resellers or if theyre believed to be abusing their discount codes in any way, shape or form. Some employees dont even let their family members use their discounts because they could lose their jobs. Ann Hebert on the other hand was allegedly allowed to not only let her son blatantly abuse the family discount card, but also make up to $600,000 a month. Other employees feel that had Hebert been a woman of color the consequences wouldve been much harsher than simply getting to resign and being ushered out of Nike HQ like she was afforded to do. Though we hope this will lead to Nike making dramatic changes to ensure that everyday customers who dont have inside connections and fancy sneaker bots to eat up merchandise, were not really holding our breath at this point. Neither are their employees. I dont think much of anything will change, said a source. I hope, if anything comes of this, that senior leaders reconnect to employees, buy into rebuilding the culture we used to have, actually act like leaders rather than entitled assholes. Whats more, sources said, Nike executives and other higher-ups need to understand that employees at a store level are dealing with backlash directly from consumers. Its been hell, because of the ripple effect, a source toldInput, sayin theyre aware of nasty people going into Nike stores accusing employees of backdooring and propping up a trust fund baby. Goddamn trust fund babies!