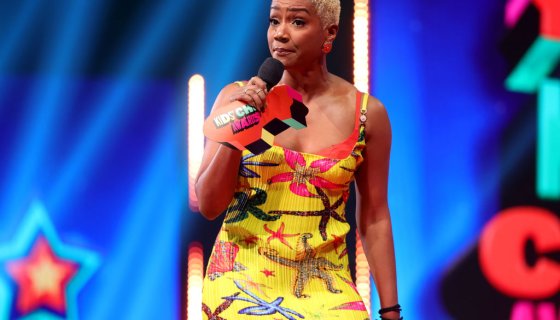 Tiffany Haddish has built her professional reputation on speaking her mind, so when the latest audio leaked regarding her feelings about Nicki Minaj, few were surprised.

has built her professional reputation on speaking her mind so when the latest audio leaked regarding her feelings about Nicki Minaj few were surprised. According to TMZ , in a recent chat on the invite-only app, Clubhouse, Tiffany Haddishwas partaking in a discussion when a guy compared her to Nicki calling her the Nicki Minaj of comedy right now. Anybody tell youre like the Nicki Minaj of comedy, the fan said. Just killing the muthaf*ckin game. Another fan shot down the comparison, saying Haddish shows up on time, to which Haddish responded, And unlike Nicki, I treat everybody with respect and dignity. While many are unsure where the shade came from, some fans are attributing the rift between the two ladies to the 2018 moment at the MTV VMAs when Haddish called attention to Camila Cabellos five nominations that night, before dragging Cabellos former group by adding, Those of you watching at home, hi Fifth Harmony! Later in the evening, while accepting her Moonman for Best Hip-Hop Award, the Yikes rapperwarned Haddish, Dont be coming for Fifth Harmony because Normani is that b*tch! Later that evening former 5H member Lauren Jauregui later tweeted about the jab, writing that it was time for women to support one another. Waiting for the day when supporting one successful dope woman does not mean insult to other successful dope women, Lauren Jauregui wrote. While neither Nicki Minaj nor Tiffany Haddish have responded to news about the leak, something tells us that Haddish will be making an appearance in a Nicki line real soon. In other Tiffany Haddish news, the comedian turned triple threat most recently added Grammy Award winner to her resume after finding out she won the coveted award right in the middle of a taping for her CBS show, Kids Say the Darndest Things. On Sunday, the Black Unicorn made history by winning the Grammy for Best Comedy Album for her Black Mitzvah Netflix special, making her only the sixth woman to win the prestigious award and second Black woman to ever win, beating out fellow comedian Jerry Seinfeld and his special 23 Hours to Kill. On Monday morning, she shared her emotional reaction via Instagram showing how she once again turned her win into a lesson of confidence. Check out the heartwarming clip below,