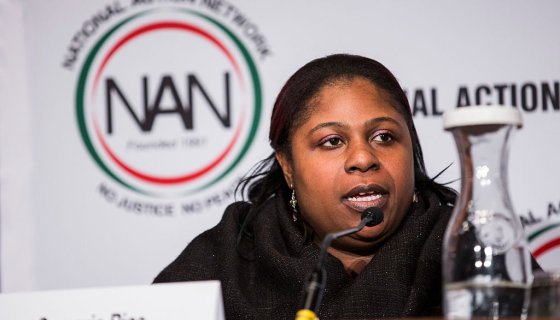 Samaria Rice has teamed up with Lisa Simpson, the mother of Richard Risher, who was shot and killed after being accused of shooting at police officers. The mothers released a statement breaking down what exactly they want to see from activists claiming they represent the Black community.

CLOSE Source: Andrew Burton / Getty Samaria Rice and Lisa Simpson are making it perfectly loud and clear. They are not here for any of the activists and people they feel are making a buck off their dead sons names and Black pain. Earlier in the week, Rice took to Facebook to call out Tamika D. Mallory, calling her a clout chaserfollowing her appearance during Lil Babys Grammys performanceof his protest song The Bigger Picture. A very upset Rice also accused Mallory and others associated with the Black Lives Matter movement of profiting off their dead relatives. Now, Rice has teamed up with Lisa Simpson, the mother of Richard Risher, who was shot and killed after being accused of shooting at police officers to release a statement breaking down what exactly the two mothers want to see from activists claiming they represent the Black community. In the statement, Mallory, Shaun King, who penned a ridiculous articlein response to Rices FB post, civil rights attorneys Benjamin Crump and Lee Merritt, BLM co-founders Patrisse Cullors and Melina Abdullah, and the Black Lives Matter Global Network are directly called out. The two mothers demand those mentioned above to stand back and stop monopolizing and capitalizing our fight for justice and human rights. We never hired them to be representatives in the fight for justice for our dead loved ones murdered by the police. The activists have events in our cities and have not given us anything substantial for using our loved ones images and names on their flyers. The statement also reveals that Rice questioned if Crump actually knew Ohios laws and that she gave him the boot 6-8 months into Tamir Rices case. Rice closes out the statement by saying, We dont want or need yall parading in the streets accumulating donations, platforms, movie deals, etc. off the death of our loved ones, while the families and communities are left clueless and broken. Dont say our loved ones names period. Thats our truth! OFFICIAL STATEMENT FROM SAMARIA RICE, MOTHER OF TAMIR RICE AND LISA SIMPSON, MOTHER OF RICHARD RISHER. Myself, @DaShaunLH and @likefannielouhad a conference call with Samaria and Lisa, and below is their full statement regarding Tamika Mallory, Shaun King, Benjamin Crump etc: