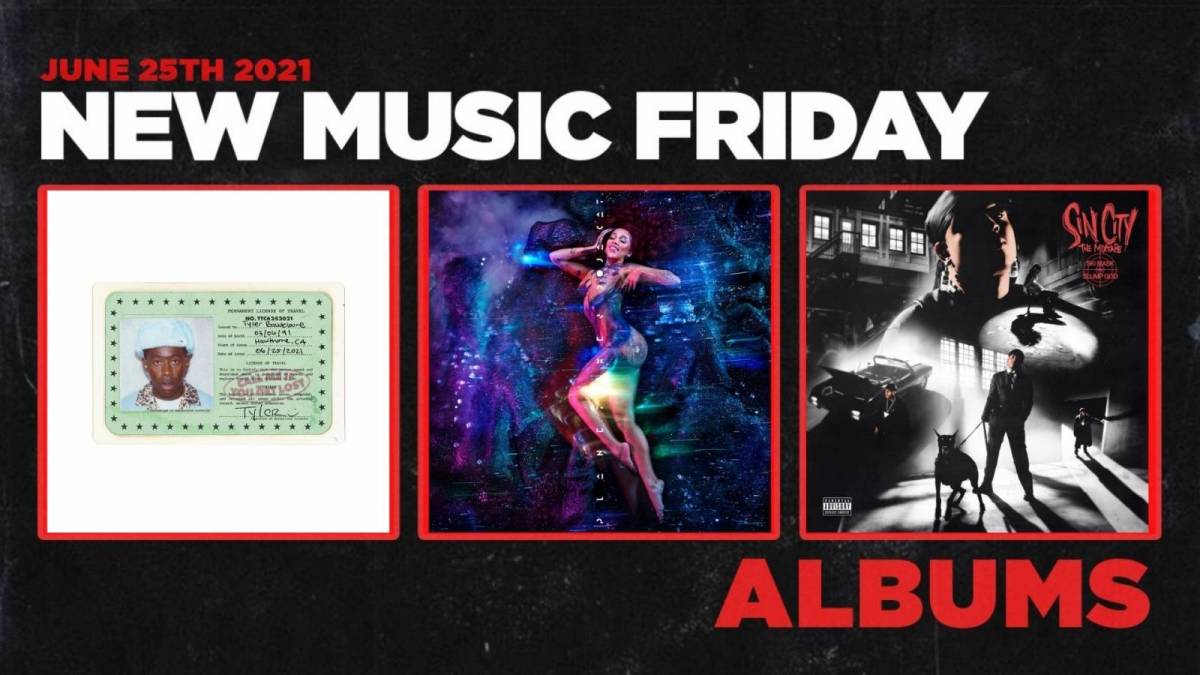 New Music Friday - New Albums From Tyler, The Creator, Doja Cat, Logic, Juicy J + More Published on:Jun 24, 2021, 9:59 PM by 0 Though the month of June is nearly over, the new vibes continue to roll in and HipHopDX has created yet another comprehensive guide to navigating the hottest releases to enhance your weekend soundtrack. This weeks edition of New Music Friday albums coverage is packed with fresh material such as Tyler, The Creators star-studded comeback release and Juicy Js hustle-time deluxe edition effort. Theres also the highly anticipated return of XXXTENTACION collaborator Ski Mask The Slump Godand Doja Cats pop-rap hybrid album to look forward to in this roundup along with more new music from Curren$y and his Jetlife record label, the un-retirement of Logic and Bfb Da Packman, among others. Check out the full list of releases below. Tyler, The Creator Call Me If You Get Lost The whirlwind rollout for Tyler, The Creators IGOR follow-up album Call Me If You Get Lost ramped up rather quickly. After being initiated by a billboard with a call-in hotline, he delivered on music with a pair of cryptic and hilarious skits,instant fan-favorite singles Lumberjack and Wasyaname.On Thursday (June 24), Tyler amped up the anticipation of the project by revealing the stacked tracklist for the album, which includes features from Lil Wayne, 42 Dugg, Ty Dolla $ign, YoungBoy Never Broke Again, Brent Faiyaz, Domo Genesis, Lil Uzi Vert, Pharrell and more. Given the fact that IGOR delivered a No. 1 debut on the Billboard 200 Chartin 2019 and a Grammy Award for Best Rap Album in 2020,Call Me If You Get Lost has a ceiling to breakthrough in order to match the years-long success Tyler, The Creator has experienced thus far. Doja Cat Planet Her Doja Cat has racked up a series of impromptu wins in the months leading up to her Planet Her album, starting with her not-so celebrated chart-topping hit Say So last November. And following the cosign she received from Hot 97s on-air host Ebro Dardenback in April, the news of her recent platinum certification from the RIAAfor her smash Best Friends collaboration with Saweetie is that much sweeter for the Hot Pinksinger. Now, with the world eating out of the palm of her hand, Doja Cat has delivered her extraterrestrial Planet Her album. Juicy J The Hustle Still Continues (Deluxe) Memphis rap mainstay Juicy J announced the deluxe version of his 2020 The Hustle Continues album earlier this month with the visual single for Take It featuring Nightmare Vacation rapper Rico Nasty and a posthumous verse from legacy Three 6 member Lord Infamous. As he prepares to blast off with his second fully independent release in over a decade, Juicy J is reminding fans that his moves never stop on The Hustle Still Continues with the inclusion of six new tracks and feature guest verses from Pooh Shiesty, Project Pat, Henry AZ, and Kaash Paige. Logic The Ys Collection: Vol. 1 Following the release of Logics Under Pressure album last year, the Maryland-born MC had the core group of his cult fanbase convinced he had given them his last project after announcing the release would serve as his exit from the rap game and entry into early retirement. Hanging up his Hip Hop superhero cape hasnt proven to be easy for Logic, who announced the formation of a supergroup with veteran producer Madlibback in April, and followed that move up by dropping their collaborative Raddest Dadsingle in May. And with the release of his official comeback single,Logic has made a full-fledged return to rap with The Ys Collection: Vol. 1 project. Ski Mask The Slump God Sin City The Mixtape Florida rap SoundCloud pioneer Ski Mask The Slump God has kept a low profile since the release of his 2018 Stokely album. Following the release of his Lil Gnar-assisted New Bugatti single, Ski Mask springs into action days after the third anniversary of XXXTENTACIONs unfortunate deathwith his nine-track, featureless Sin City The Mixtape project. Curren$y & JetLife Family Welcome To JetLife Records 2 Curren$y is seemingly everywhere at the moment, and his recent appearance for JAY-Zs MONOGRAM HIGH TALES video seriesunderscores the extent to which the New Orleans rapper has been grinding at this level which amounts to nearly a two-decade run. But as all bosses must do, Spitta has begun to assemble a talented group of artists within his inner circle over the years, and thus, his Jet Life Recordings imprint has blossomed into a sprawling label with well over 10 signees repping the gang. Effectively cementing the new line-up of audio dope creators, Curren$y has assembled the entire Jet Life crew, with the addition of special guests, for the label compilation album Welcome To JetLife Records 2.