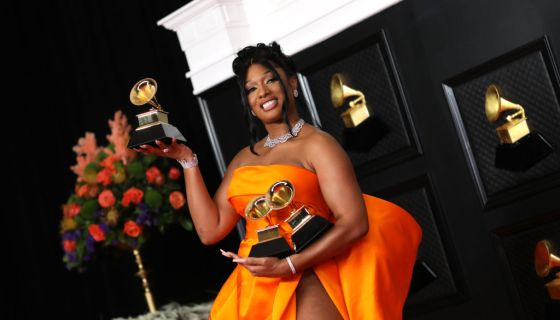 Megan Thee Stallion is speaking out against those who think the GRAMMYs are rigged following her big night at the prestigious ceremony.

is speaking out against those who think The GRAMMYsare rigged following her big night at the prestigious ceremony. Source: Jay L. Clendenin / Getty On Sunday night, Thee Stallion racked up at her first GRAMMY Awards bringing home the trophies for Best New Artist, Best Rap Performance, and Best Rap Song . While some people in the music industry have continuously pushed the narrative that the show and who gets which award is all a strategic system ploy for performances and ratings, Megan isnt on that same wavelength. After leaving an afterparty on Sunday night, Megan ran into some photographers from TMZ, whom she chatted with about her big night. As the star signed autographs and took pictures, she denied that her GRAMMY wins were anything but genuine. Hell no, the Grammys aint rigged, she said. B***h, you win some, you lose some. Meg made history this weekend, becoming the first female rapper since Lauryn Hillto win the Best New Artist award. Still, a lot of musicians believe that the Recording Academy doesnt fairly assess music, giving awards in exchange for performances at the GRAMMYs, rather than not letting outside factors interfere. This very problem is the reason The Weekndhas decided to boycott The GRAMMYs, a decision that came after his most recent project, After Hours, got snubbed. According to the singer, he was in talks to perform at the ceremony before accepting his gig at The Super Bowl halftime show , and when he opted for the latter, The Recording Academy retaliated by not giving him any nominations. Other artists like Drake, Kanye West, and Frank Oceanhave brought up similar gripes in the pastbut according to Megan, she won her awards fair and square. Categories: For Discussion For Your Information