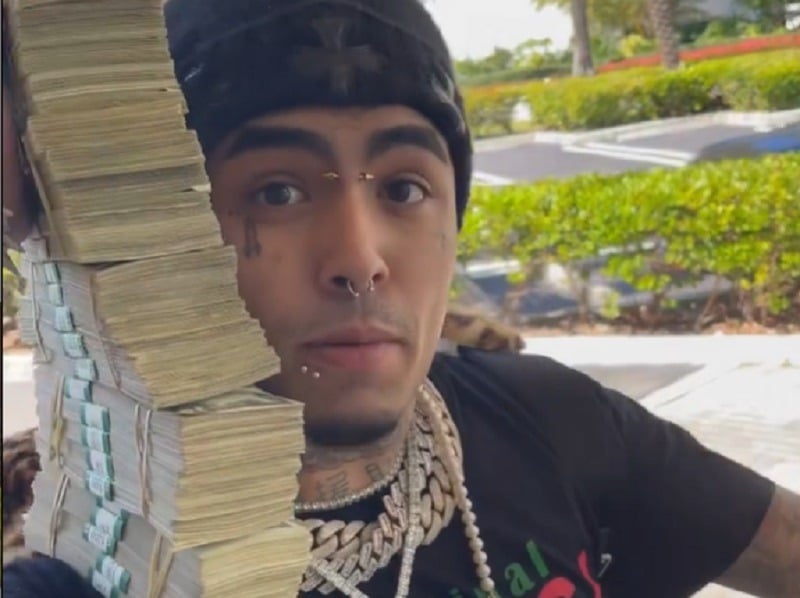 Miami rapper Lil Pump is all about making a spectacle of himself. Donald Trump's favorite hip-hop token was at it again Monday, acting like a wild man on social

Share Lil Pump Screams His New Album Is Coming Infamous troll Lil Pump posted an Instagram videoof himself carrying stacks of money out in public which he proceeded to drop on the ground like he didnt care and hopping on top of a luxury car that may or may not have been his own. All of this to announce Lil Pump 2 is coming at some point. Pumps self-titled debut album dropped in 2017, followed by Harverd Dropout in 2019. I only walk out with twos because Lil Pump 2 is on the f*ckin way, b*tch! Yeah! Dont play with me, my body is different. Im droppin these b*tches on the floor! Pick it up, n*gga, pick it up! Lil Pump 2 is on the way, hoe! https://www.instagram.com/p/CPRbaSFnswl/ Lil Pump Promises Revenge After Car Damage Not too long ago, Lil Pump wasnt so carelessabout damaging ones vehicle. Footage circulated online recently showing the Gucci Gang hitmaker going crazyafter someone messed up his ride. Bro. Ima catch you. Whoever did this, Ima catch you and Ima blow your brains out, b*tch. Ima catch your a**, little n*gga. Little bum a** b*tch. Step foot in my yard again. I want you to step foot in my yard. Ima be up for three days straight. Come in this b*tch. I f*cking dare you. Thats a free body for me. Pump + Kodak Black Are Up To Something On a more positive note, Lil Pump went to his social media pagesto share some must-like shots. The post featured a slideshow of pics showing him and fellow Florida rapper Kodak Black embracing one another. We could hit bout it @kodakblack Lil Pump Forgets Dissing Eminem During a The Fat Joe Show interview on Instagram Live, Lil Pump blanked out when asked aboutdissing rap god Eminem. Despite Fat Joe continuing to reference the jabs, Pump swayed away from the topic. Who?, Pump said in response to being questioned about dissing Eminem. I dont remember that. Who? Back in December 2020, Pump made dicey comments bashing Em. In the now-infamous footage, he is shown calling Eminem lame as hell and old. F*** Eminem, you is lame as hell, aint nobody listening to your old a**. You lame as f***, b****! I woke up on bulls*** today, Im back on my f*** s***. Lil Pump