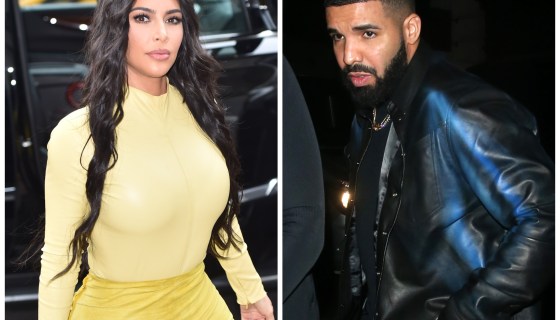 There's a British tabloid that is citing a source who claims Drake has his sights set on dating Kim Kardashian following her split from Kanye West.

True or False? Drake Reportedly Wants To Date Kim Kardashian Now That She's Single Kiki, Do You Love Him? Sources Say Soon To Be Single Serial Swirler Kim K Is The Object Of Drakes Desires Posted on 13 hours ago - By thatsmybiz Bossip Video For those of yall wondering how far new divorce Kim Kardashianwill have to look for her next love it turns out theres a very choice candidate right in her Calabasas community. Source: New Media Images / WP Pix / SplashNews / Splash News An inside source tells UK tabloid Heatthat Drake has his eye on dating Kim Kardashian and is ready to connect or reconnect if the rumors are right whenever she is: Drake could never understand what Kim saw in Kanye he was saying for years how he wasnt the right guy for Kim and it would all end in tears. He was surprised it took her so long to realize, and started messaging her the moment it became clear that the divorce was inevitable, hes ready to see her whenever she says the word, basically, and hes confident that will happen fairly soon. Damn yo The ink isnt even dry on the divorce papers and Drake is already in the DMs. Cold world. Still, according to the report, Kim isnt ready to jump back into the dating pool just yet and shes wary of getting involved too quickly before her and Kanyes divorce is fully settled. Rumors that Drake and Kim had been intimate in the past have been the rumored basis of the longtime issues between Kanye and the Canadian rapper. Ironically, the release of Drakes new song Wants and Needs has revived speculation from fans about the beef. Lyrics from the song include: Yeah, I probably should go link with Yeezy, I need me some Jesus / But soon as I started confessin my sins, he wouldnt believe us. The source for Heat says Drakes mention of West was fully intended to antagonize him: Kanyes furious, were told. Publicly, hes saying he doesnt believe that anything happened between Drake and Kim, but theres still a part of him that worries it could have, and now he wants closure. He needs to know for certain what may have gone down, but its a difficult thing for him to confront her over, as theyre trying to be amicable and figure out the final terms of their split. Were not going to lie we saw this coming. But would Kim really be this bold? Do you think shed be petty to date Drake at this point? Lets be honest, who else do you think would be a match for her at this point? Categories: Divorces For Your Information