Drake Accepts 2021 BBMAs Artist Of The Decade Award With Son 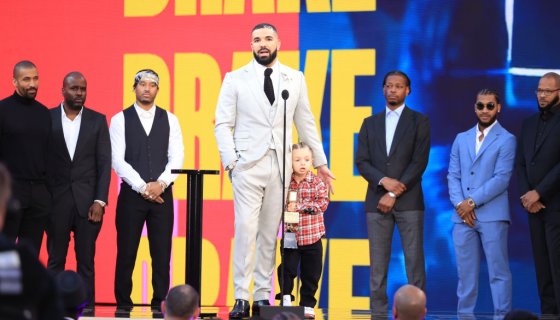 During an acceptance speech at the Billboard Music Awards, Drake had his toddler son in tow, prompting Twitter to mention his Virginia nemesis.

CLOSE Source: Christopher Polk/NBC / Getty The explosive beef between Drakeand Pusha Tgot personal when the latter of the two essentially revealed to the world that his Canadian rival was a father to a baby boy. During an acceptance speech at the Billboard Music Awards Drake had his toddler son in tow, prompting Twitter to mention his Virginia nemesis. The 2021 Billboard Music Awards were held at the Microsoft Theater in Los Angeles, Calif. on Sunday (May 23), hosted by Nick Jonas. Drake was honored with the Artist of the Decade Award, which acknowledged the rappers decade-long tenure of being one of the most potent artists of his generation. Coming into the awards ceremony, Drake has won more awards than any other artist with 27 wins prior to Sunday. Flanked by his family and crew, Drake spoke candidly about having doubts in himself and his music, which seemingly contradicts his unwavering confidence featured in his songs, humanizing the superstar if only for the briefest of moments. However, it was the appearance of little Adonis that tugged on the heartstrings as he clutched his dads legs perhaps nervous about the adoring crowd. At the end of the speech, the proud papa lifted his son up for a kiss on the cheek, which didnt go over as well as hoped but it was probably an overwhelming moment for the youngster. With the event concluded, fans on Twitter got Pusha Ts name trending considering it was their feud and the blistering The Story of Adidon track that was the zenith of the beef. As a result, fans are discussing not only Drakes big win but also the man hell forever be linked with in some fashion in Pusha T. Check out Drakes BBMA speech and the corresponding reactions below.