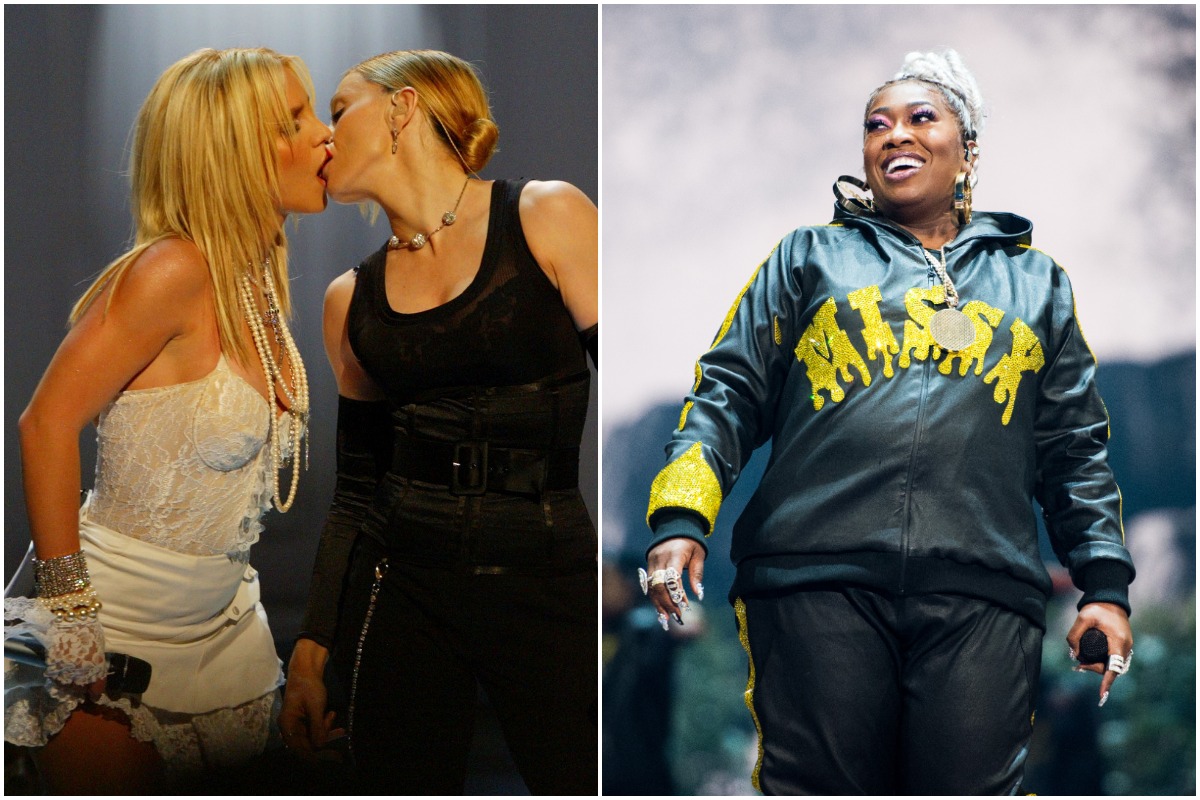 See if Missy Elliott made an appearance a Britney Spears and Madonna's 2003 performance at the MTV Video Music Awards.

Britney Spears and Madonnashocked the world in 2003. During their performance at the MTV Video Music Awards they shared a kiss at the end of Like A Virgin. Afterward, the Queen of Pop and Christina Aguilera locked lips. However, music lovers focused on her smooch with the Baby One More Time singer. Almost two decades after the performance, fans of the singers might not have noticed that Missy Elliottwas apart of the pop singers historical act. (L-R): Britney Spears, Madonna, and Missy Elliott| Kevin Kane/WireImage/John Shearer/Getty Images Why many fans only remember Britney Spears and Madonnas VMA kiss In 2003, MTV approached Spears and Aguilera about performing at the VMAs. Unlike their previous appearances, the singers worked together to pay tribute to Madonna. They sang a medley of the pop stars hits while wearing lacy wedding lingerie onstage. The performance shocked their supporters, as the singers faced multiple feud rumors. RELATED: How Does Britney Spears Ex, Kevin Federline, Feel About Her Conservatorship? Eventually, Madonna came onto the stage to sing alongside Aguilera and Spears. In the middle of their rendition of Hollywood, the Vogue singer planted a kiss on Spears. She then turned to Aguilerato repeat the gesture, but MTVs cameras panned to the audience. During a clip of the performance, Spears fans can see her ex, Justin Timberlakes, reactionto the singer kissing Madonna. Aguilera shared with Andy Cohen on Sirius XM that the editing decision was a cheap shot from the network. It was weird. And you know why they cut away for it? They cut away to get Justin s reaction, she explained. Missy Elliott performed Work It after their kiss Aguileras part in the infamous VMA kiss with Madonna isnt the only thing that many viewers of the award show missed. According to Glamour one of the gems overlooked was Madonnas daughter, Lourdes Leon who was apart of the performance. During the wedding-themed tribute, Lola graced the stage as a flower girl. RELATED: Alyson Stoner Worried About Ruining Missy Elliotts Video Vanguard Tribute Before Her VMA Performance of Work It In addition to missing the Queen of Pops child, another element of Madonna, Spears, and Aguileras act goes unnoticed. At the end of her kiss with the Sometimes singer, the 62-year-old mother of six introduced Elliott to the stage. Afterward, the rapper performed her 2003 hit, Work It. For the performance, she wore a black tuxedo with a rhinestoned hat and bowtie. Madonna was reportedly rigid during the rehearsal for the VMAs RELATED: Missy Elliott Explains the Confusion Surrounding Her Work It Lyrics-They Thought I Was Saying All Kinds of Nasty Stuff Despite the controversy that followed, Madonna was reportedly pleased with her, Spears, and Aguileras VMA performance. However, Spears longtime manager, Larry Rudolph, said the Crazy For You artist wanted the tribute to be as perfect as possible, per Billboard Madonna had been very, very, very rigid about the rehearsals. She was telling Britney and I every day, Be here tomorrow at 10 oclock, he shared back in 2014. She would never address me by name, Rudolph continued, adding that Madonna, would just say, You make sure Britneys here tomorrow at 10 oclock.' In addition to the VMAs, Spears and Madonna collaborated on Me Against The Music in 2003. The track appeared on the mother of twos fourth studio album, In The Zone. 2021 Showbiz Cheat Sheet, All Rights Reserved.