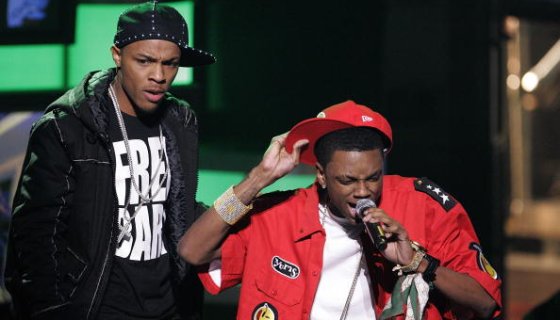 The Verzuz battle between Bow Wow and Soulja Boy hasn't gotten an official date yet, but that's not stopping the two Hip-Hop stars from clowning each other to hype up the event. Bow Wow decided to clown Soula Boy's hair, and Twitter joined in on the fun.

CLOSE Source: Ben Rose / Getty The Verzuz battle between Bow Wow and Soulja Boyhasnt gotten an official date yet, but thats not stopping the two Hip-Hop stars from clowning each other to hype up the event. The Verzuz showdown between the two alleged problematic rappers has been confirmed. To make sure the excitement builds until Verzuz founders Swizz Beatzand Timbaland drop the date, they have been going at each other on social media. Instead of flexing about their music which the events solely focus on, Bow and Soula Boy, who are friends, have been taking digs at each other. Bow Wow recently took to Twitter to engage with his fans in an AMA (ask me anything) session on Twitter. Soulja Boy used the opportunity to take a jab at the pint-sized rapper, asking him, How you get so lame? early Monday (June 7). Bow Wow was ready and quickly responded by dissing Big Dracos struggle hairline replying, I dunno i should ask you! Bow Wow replied. Have you seen your hairline lately? Bow Wow wasnt done clowning the Crank That rapper. He proceeded to tweet and delete photos of Souja Boy with braids with the caption, Soulja got them braids women get when they getting a sow in. Someone has to inform Mr. Moss that the correct term is sew-in. But that hasnt tampered Soulja Boys confidence. The rapper is so sure he will smoke Bow Wow in the upcoming matchup that he offered to his Lamborghini on the line, saying he will give Bow Wow the pink slip to the exotic car if he wins the Verzuz battle. Anyway, fans have been enjoying the back and forth antics between the two artists. You can peep some of the reactions in the gallery below.