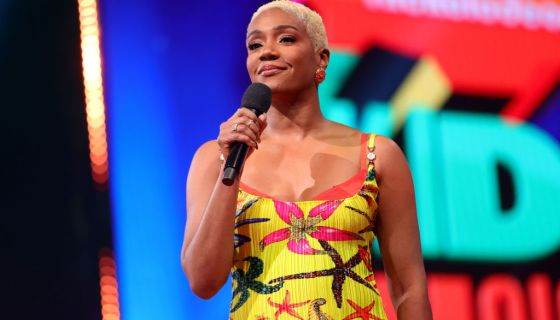 Even though much of the internet is swirling with love surrounding a viral clip of Tiffany Haddish hearing the news of her Grammy win, the comedienne is simultaneously being held to the fire by others who are calling her out for shady comments she recently made about Nicki Minaj on the audio chat-based app Clubhouse.

Tiffany Haddish Just Won A Grammy, But Twitter Is Dragging Her Following Her Recently Surfaced Comments On Nicki Minaj Posted on 1 hour ago - By MadameNoire Featured Video Source: Rich Fury/KCA2021 / Getty Even though much of the internet is swirling with love surrounding a viral clip of Tiffany Haddishhearing the news of her Grammy win, the actress and comedienne is simultaneously being held to the fire by others who are calling her out for the shady comments she recently made about Nicki Minaj on the audio chat-based app Clubhouse As a trending topic for a good portion of the day, Twitter users are clearly having mixed emotions about Haddish at the moment. In one post with over 19K Likes from just hours ago, Haddish is seen tearing up on the set of Kids Say the Darndest Things with Tiffany Haddish when she received the news that her Black Mitzvah Netflix special won a Grammy for Best Comedy Album a win not achieved by a Black woman since Whoopi Goldberg in 1986. In support of her achievement, commenters underneath the post said things like Tiffany Haddish is a national treasure and Congrats to one of the most talented humans on Earth. Well done! On the flip side though, Haddish is also trending because of a recently released audio clip where she is heard not being too enthusiastic when a Clubhouse user said she was the Nicki Minaj of comedy right now. Citing how the comedienne was killing the mother f*cking game instead of taking it as a compliment, Haddish shadily responded to the user by saying she wasnt like the rapper because she treats people with the respect they deserve. To the audible agreement of some of the chats other vocal participants, Haddish said, And unlike Nicki I treat everybody with respect and dignity. While its unclear how recent the clip is, the comediennes comments might be based on residual feelings shes held onto since Minaj called her out during the 2018 MTV VMA Awards. If you recall, during a bit Haddish and Kevin Hart were doing amidst the show, the comedienne threw some shade at the girl group Fifth Harmony. Then, when Minaj later came on stage to accept an award, the rapper directedly told Haddish not to discount the girl groups talent especially that of Normani, one its most popular stars. Minaj said to Haddish as they were on stage, Tiff, dont be coming for Fifth Harmony because Normani is that b*tch. Many Twitter users have also been quick to point out that just because Haddish just won a Grammy doesnt mean that theyll be forgetting some of her past indiscretions. Bringing up a distasteful comedy bit Haddish had done about the abusive altercationRihanna was in, and the comediennes alleged role in one Black female doctors suicide attemptrecently, people think that Haddishs comments on Minaj not treating others with respect is purely hypocritical. Fresh off her Grammy win, and as an increasingly controversial figure, see some of the tweets circling Haddish at the moment down below. Categories: Actors Celebrity News Musicians TRENDING ON MADAMENOIRE Comment Disclaimer: Comments that contain profane or derogatory language, video links or exceed 200 words will require approval by a moderator before appearing in the comment section. XOXO-MN Follow Us We've joined the BHM Digital family of websites and have updated our Terms of Service and Privacy Policy.By continuing to use this site, you agree to our updated Terms of Service and Privacy Policy.