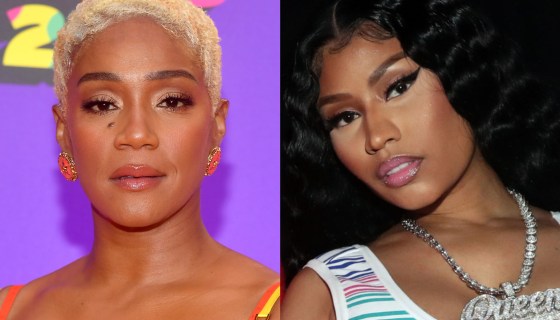 Tiffany Haddish seemingly has some unresolved beef with Nicki Minaj and took shots at the rapper during a debate on the audio-only app, Clubhouse. In the audio clip that surfacing, someone called Tiffany the Nicki Minaj of comedy, but the Grammy-Award-winning actress wasn't too happy with the comparison.

ItsOnSite , someone called Tiffany the Nicki Minaj of comedy. From her response, it sounded like she took offense to what was meant to be a compliment and her response was super shady. After the Nicki Minaj of comedy comment was made, someone chimed in and said, unlike Nicki, Tiffany shows up on time. Tiffany responded and said, unlike Nicki, I treat everyone with respect and dignity. Was that necessary??? Take a listen at the audio below: Nickis Barbz immediately went IN on Tiffany who has yet to address the now-viral clip. One fan reposted a skit Tiffany starred in years ago, that poked fun at , asking the question, where was the respect and dignity here? People think Tiffs beef might have sparked in her head back at the 2018 MTV Video Music Awards as Minaj and Haddish crossed paths at the podium. Early in the evening, Haddish called attention to Camila Cabellosfive nominations that night, before dragging Cabellos former group by adding, Those of you watching at home, hi Fifth Harmony! Later that night, Minaj, 38, while accepting a Moonman, addressed the dig from Tiffany, Dont be coming for Fifth Harmony because Normani is that b*tch! This isnt the first Clubhouse controversy Tiffany has been involved in. A few months ago, the actress was accused of cyberbullying by a CH user. According to Madame Noire Tiff was reportedly bullying Black doctors and spreading misinformation about COVID-19 and the virus vaccine on the app. In the aftermath of the conversation, a doctor who was reportedly targeted by Haddish and allegedly an influencer, Chakabars allegedly made an attempt on her own life. What do YOU think of all of this? Categories: For Your Information News