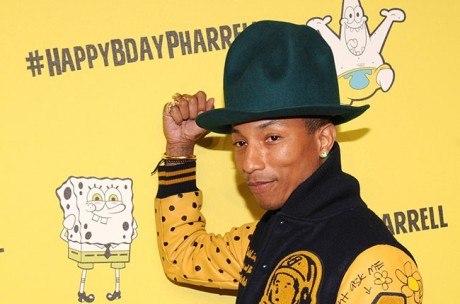 Visit streaming.thesource.com for more information On this day in Hip Hop history, the seemingly ageless producer, singer, rapper, author, designer, creative director, and label head Pharrell Williams was born 48 years ago. His music has touched the hearts and minds of literally billions of people, his humanitarian efforts have helped toward preserving the planet for the next generation to enjoy, and his actions to promote happiness and equality have helped move society in a positive direction. Pharrell Lanscilo Williams was born in Virginia Beach, Virginia to Pharaoh and Carolyn Williams. He is the eldest of three sons. His love for music and art started at a young age. He met the other half of the legendary production duo The Neptunes, Chad Hugo, at band camp in the seventh grade. Pharrell at the time played the piano and the drums and Hugo played the tenor saxophone. In the early 90s, Pharrell and Hugo formed the group The Neptunes and signed with Teddy Riley of Interscope Records upon graduating high school. Advertisement Success began to come in 1993 when Pharrell met fellow Virginia rappers Clipse. The rap duo signed to Artista Records under Pharrells Star Trak Entertainment. In 1994 Pharrell and Chad Hugo officially established themselves at The Neptunes and produced part of Blackstreets self-titled album. By the 2000s the Neptunes had a name for themselves and in 2001 got their first international #1 hit with Britney Spears Im a Slave 4 U. That same year Pharrell, Hugo, and Shae Haley released their first album as the group N*E*R*D titled In Search of in Europe, where the first Kelis album, produced by The Neptunes, had its best reception. After realizing that the album sounded much like their other work, the group decided to reproduce the album with Spymob. In 2002 the re-release of the album came with amazing reception and Pharrell was named Producer of the Year by Billboard and The Source. In 2003 The Neptunes released their only album The Neptunes PresentClones which was a compilation of songs and remixes by Pharrell and Hugo. The album featured Busta Rhymes, Clipse, Ludacris, Jay-Z, Nelly, Snoop Dogg, Jadakiss, ODB, Kelis, and Nas and debuted #1 on the Billboard 200. It also claimed the #1 spot on the UK R&B Albums chart and the Dutch MegaChart. The next year N*E*R*D released their second album Fly or Die which was more popular than the first. It had a very positive international reception. That same year Pharrell received two Grammy awards, one for Producer of the Year and a second for Best Pop Vocal Album for his work on Justin Timberlakes Justified album. He also put out the hit single Drop It Like Its Hot that year with Snoop Dogg, which was Pharrells first #1 single in the US. In 2006, Pharrell released his first solo album. In My Mind was released on July 25 and debuted at #3 on the Billboard 200 chart where it peaked. The album is full of hits with artists like Kanye West, Gwen Stefani, Nelly, Snoop Dogg, and more. Over the next few years, Pharrell continued to produce hit songs as well as build his fashion empire with his brands Billionaire Boys Club and ICECREAM. His work with a designer and BAPE founder Nigo helped him to rise to prominence in the early 2000s as a streetwear designer. His popularity grew as a designer was almost simultaneous with his growth as an artist. During the 2010s Pharrell has continued to have a creative influence. His 2013 single Happy from his second album Girl has become the international anthem for happiness around the world and can be considered his most popular record. This decade he has also begun his i am Other campaign which is a multimedia creative collective and record label that serves as the overarching brand over his many endeavors including: Billionaire Boys Club, ICECREAM, Bionic Yarn and the Youtube channel that launched as i Am Others founding platform. Most recently, Pharrell can be seen as a host of the popular TV show, The Voice. He has also just been named the creative director of the well established denim brand G-Star Raw. Pharrells has become synonymous with Hip Hop and his brand is one that has inspired many in the generations under and above him. On behalf of everyone here at The Source wed like to wish Pharrell Williams a happy born day, may he see many more years of success. About The Author The Source Magazine Staff Writer Related Posts