The Kid Laroi, Saweetie, and More Deliver at iHeartRadio Festival 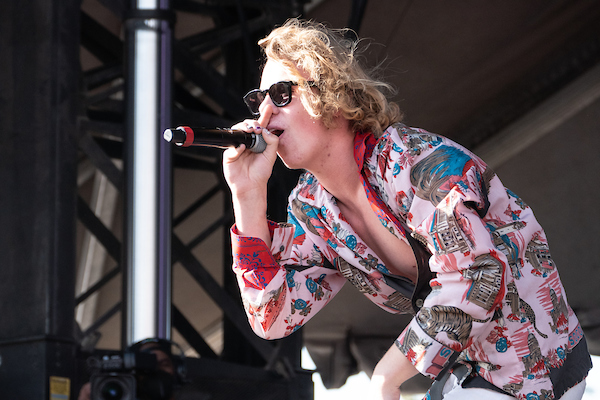 Visit streaming.thesource.com for more information iHeartRadios Daytime Stage returned to Sin City this past weekend and invited some of the biggest emerging rappers to deliver doses of rap and hip-hop to the Las Vegas crowd. With memorable performances from The Kid Laroi, Saweetie, 24kGoldn, Olivia Rodrigo, and more, the outdoor portion of the 2-day event certainly delivered. Kicking off the festival in the morning was 20-year-old Mood rapper, 24kGoldn. The emerging rapper doesnt have a lot of miles on stage, yet he already has a charismatic and energetic stage presence that makes for a great live performance. The rapper opened his set with songs like Valentino, 3, 2, 1 and City of Angels before ending the performance on a high note with his breakout single Mood. Advertisement Next up, a collection of the festivals country and pop artists hit the stage, delivering a little something for everyone. Country musics Russell Dickerson and Gabby Barrett performed, as well as pop singers Conan Gray and Tate McRae, before Yungblud and All Time Low rocked out for their Vegas fans. On the back 9 of the festival, two rappers that have dominated Top 40 radio hit the stage. The first of two was Saweetie, who reminded the crowd that despite her basic outfit (due to a delivery delay that almost canceled her set) she is far from a basic bitch. Saweetie represented the Bay with a performance of her Too Short-sampled Tap In, and also performed some of her biggest hits like My Type and the Doja Cat-assisted Best Friend. Last for the rappers of the afternoon was Australian rapper, The Kid Laroi. The Stay rapper/singer emerged on the scene with his connections to the late Juice WRLD and today he keeps close to huge pop stars like Justin Bieber and Miley Cyrus. Laroi is just hours removed from selling out his mega headlining tour in under 4-minutes and he kept the momentum going with his iHeartRadio set. Last but not least, Olivia Rodrigo blessed the stage for what was clearly a crowd of her biggest fans. Rodrigo delivered her first-ever concert and did so without issue. The Drivers License singer performed five tracks from her debut album, and although her single Deja Vu was noticeably left off the setlist, the singer is now 1 for 1 when it comes to putting on great performances. Check out our gallery of photos from the 2021 iHeartRadio Daytime Stage: Saweetie