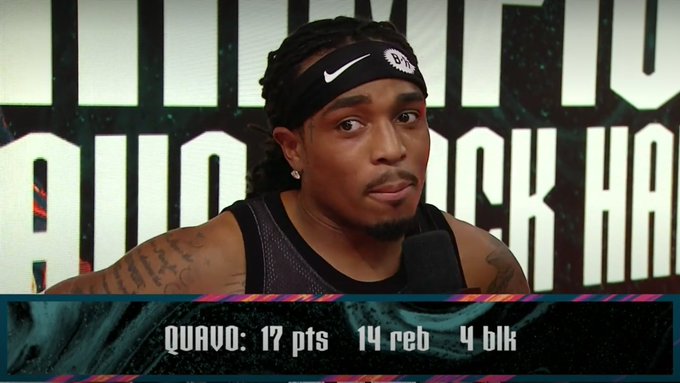 Source Sports | News, Highlights and Interviews While most eyes are on college basketball and the NBA, fans got to see some of hip-hops biggest names show off their basketball skills over the weekend in the Bleacher Reports two-on-two match on Saturday, March 6 as part of the All-Star Weekend. Artists Quavo and Jack Harlow faced off against Lil Baby and 2 Chainz with the first team ultimately emerging victorious with a final score of 21-7. Visit streaming.thesource.com for more information The event, presented by Modelo Beer, featured the makings of the best basketball rivalries from the pre-game hype to on-court trash talking to post-game bragging rights. Quavo was undoubtedly the games all-star, racking up an impressive 17 points, 14 rebounds, and four blocks. (Quavo was previously named MVP of the Celebrity All-Star Game in 2018.) Considering that he had boldly claimed the title of Best Hip-Hop Basketball Player in the World to Bleacher Report earlier in the week, he appeared to put his money (and his skills) where his mouth was. Advertisement 2Chainz appeared to trash talk the refs throughout the game, but still out-performed his teammate by far, leading to light-hearted mocking on Twitteras well as what appeared to be an admission of defeat, tweeting Been put that down basketball to go see what the field like with a laughing emoji and snake emoji. Quavo and Harlow received a cash prize of $500,000 in addition to the $500,000 that Bleachers Report pledged to donate to HBCUs of their choice. Harlow tweeted that money would be donated to Kentucky State University and Simmons College of Kentucky. .