Pharrell Williams Hailed As A Fashion Trendsetter After 2003 Photo Shared 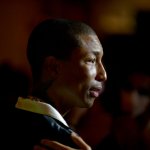 A fan on Twitter posted a photo from 2003 of Pharrell while remarking that it's the way some dress today, and others on the social media network are agreeing.

Pharrell Williams has always been a style icon to his adoring legion of fans and the industry at large, eventually landing him deep into the world of design and fashion at large. A fan on Twitter posted a photo from 2003 of Pharrell while remarking that its the way some dress today, and others on the social media network are agreeing. Twitter user @WashedMel posted a photo of Pharrell decked out in camo pants, a hoodie, a varsity jacket, and what appears to be BAPE sneakers by way of an assumed paparazzi picture. This picture was taken in 2003 and this is how n*ggas dress today lol, @WashedMel tweeted, garnering a number of responses that stood in agreement. In the early 2000s, Pharrell and Japanese designer Nigo worked together for the founding of the Billionaire Boys Club and Ice Cream brands, one of the many high-profile musician-founded streetwear brands of the early to mid-aughts. Pharrell has gone on to help design eyewear for Louis Vuitton and did the same for Moncler. He also signed with adidas and launched a series of footwear, including shoes from the NMD line and other casual footwear for the brand. There was also a high-end adidas sneaker release in partnership with Chanel, and he also released a collection with clothing brand Uniqlo with Nigo once more. Of course, it isnt all streetwearwith Pharrell as he also launched a skincare line, Humancare, last year, and hes got his hands in all sorts of other ventures including Black Ambition, a non-profit initiative geared towards assisting Black and Latinx entrepreneurs. With @WashedMels tweet going viral, others have reacted to the images with their takes as well, which has Pharrells name trending. Weve got the reactions below.