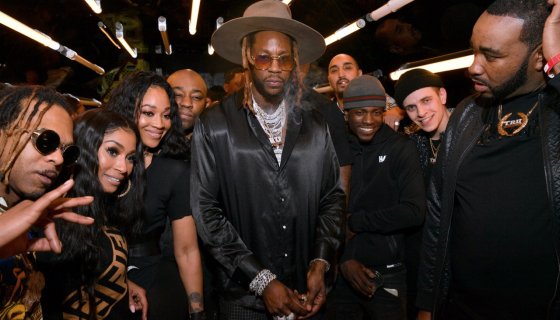 One of Rap's most flamboyant personalities showed that he can back up all the drip talk with microphone mystery. 2 Chainz recent online performance proved he is a one of one MC.

Pampered Boi: 2 Chainz Smashes His Tiny Desk (Home) Concert While Getting A Pedicure Name another rapper who got a Versace shoe deal? By Posted 20 hours ago Source: Prince Williams/ATLPics.net / ATLPics.Net One of Raps most flamboyant personalities showed that he can back up all the drip talk with microphone mastery. 2 Chainzrecent online performance proved he is a one of one MC. As spotted on Hot New Hip Hop the Atlanta trapper turned rapper put on a memorable live concert for his installment of the Tiny Deskseries. With Covid-19 still being a real threat he delivered his bars from the comfort of his own Pamper Nail Studio. True to his moniker the man born Tauheed Epps gave fans a real treat as he brought some of his most beloved songs to life all while getting a champagne pedicure. A post shared by 2 Chainz Aka Tity Boi (@2chainz) He opened up the set list with some of the standout selections from his newest effort So Help Me God (Southside Hov, Vampire). He then switches up the vibes to a stage where is backed by a live band. There he treats us to some of his sleepers including Good Drank where he segues into an impromptu freestyle where Gucci Manes verse would come in. We also get club favorites like Im Different. You can watch the concert below. Photo: Prince Williams/ATLPics.net