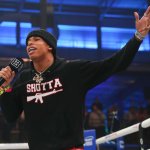 Now, the 18-year-old Memphis star is aiming his efforts at leaving the Hip-Hop game behind and focus on a career in herbal medicine.

NLE Choppa looked to be a rapper destined to live at the top of the charts with a number of crowd-pleasing hit singles under his belt and a pair of gold-selling projects. Now, the 18-year-old Memphisstar is aiming his efforts at leaving the Hip-Hop game behind and focus on a career in herbal medicine. In a series of tweets, the rapper born Bryson Potts revealed that he wants to buy out his current contract with Warner Records and focus his career towards building upon his NLE Health and Wellness brand. Finna buy out my contract and become full time herbalist. Forget the music stuff about to help my people, NLE Chppa wrote on Twitter this past Tuesday (July 6). Prior to that tweet, NLE seemed to be gearing up for the big announcement with some other related missives. Make Sure To Follow My Health And Wellness Page To Stay Updated On My Herbs @healthandwellnessnle, he wrote, pointing to an Instagram page for his business. Earlier on Thursday (July 8), Choppa added in a pair of tweets, Your diet is the vaccine. Not only food or what you eat but herbs play a major roll in your diet. Choppa then made a claim via his Twitter account that his herbs will help address incurable STDs such as herpes along with curable STIs. By the end of the year I will have herbs that can cure Herpes, gonorrhea, chlamydia, and even more STDS, NLE Choppa wrote, adding a link to his NLE Health and Wellness shop in the string. Much of NLE Choppas foray into healthier living began last year and it appears hes pretty serious about it. Kudos to him.