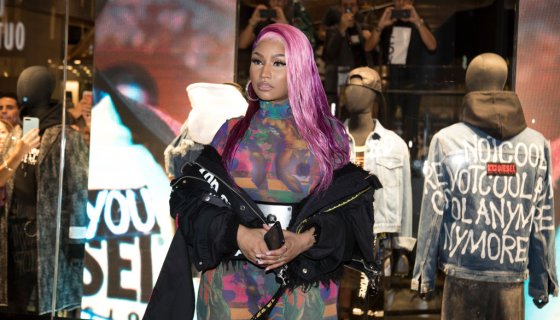 CLOSE Source: Mondadori Portfolio / Getty Nicki Minaj is apparently not done with her Twitter antics after her embarrassing anti-vaxxer-like tweet-stormthat included her believing that her cousins friends fiance called off her wedding because the groom to be got swollen testicles as a result of him being vaccinated. (I mean, of all the things that never happened, that is the never-happenediest.) To be fair, Minaj also tweeted that she likely would be vaccinated because she has to go on tour, so she never went full tin foil when it comes to anti-vaccination remarks. But she said enough to get people riled up and calling her out for using her massive platform to spread anti-science misinformation. For whatever reason, UK Prime Minister Boris Johnson was asked about Minaj and her vaccine hesitancy, to which he responded with a very polite version of, Bruh, who? What he actually said was hes not as familiar with the works of Nicki Minaj as I probably should be, which prompted Minaj to clap back with a little light-hearted ribbing. I was born there, I went to university there, I went to Oxford, Minaj recorded her saying in what Im sure she thought was a spot-on British accent. I went to school with Margaret Thatcher and she told me so many nice things about you, Nicki joked in a voice recording. Id love to send you a portfolio of my work since you dont know much about me. I am a big, big star in the United States. According to Complex UKs Chief Medical Officer Chris Whitty weighed in on Nicki again, I dont know why, but whateversaying she should be ashamed, and that there are a number of myths that fly around, some of which are just clearly ridiculous and some of which are clearly designed just to scare. That happens to be one of them. And thats when Piers Morgan, the British king of Bro, nobody asked you anything, entered the chat. Morgan called her ghastly and one of the rudest little madams hed met (like, please, Piers, be more British), to which Nicki responded with a not-so-polite version of, Bro, I dont know you. Morgan then explained to Minaj that they had, in fact, had met before. At this point, Morgan really needs to stop because hes already had to storm off setonce after being called out for giving off big incel vibes in his constant attackson Meghan Markle,who he also complained basically acted like she didnt know him. Sir, if youre unpopular with the ladies and youre salty about it, just say that. Anyway, Nicki and Piers went back and forth a little more from there, but an arguably larger (and definitely more interesting) media beef sprang up between Minaj and MSNBC host Joy Reid, who also had some harsh words to say about the Barbie Tingz rapper and her remarks on vaccines. You have a platform, sister, that is 22 million followers, okay? I have 2 million followers, Reid said on her show The ReidOut. You have 22 million followers on Twitter. For you to use your platform to encourage our community to not protect themselves and save their livesmy god, sister, you can do better than that. Youve got that platform. Its a blessing. Its a blessing that you got that, that people listen to you. And they listen to you more than they listen to me. For you to use your platform to put people in the position of dying from a disease they dont have to die from, oh my god, as a fan, as a hip-hop fan, as somebody whos your fan, Im so sad that you did that. Nicki was having none of Reids criticism. Yeeeah, nah, Nicki. Sometimes when you work in media, your correspondents are white men, but that doesnt make Reid an uncle tomiana for calling you out for reasons that have nothing to do with you being Black and everything to do with you perpetuating ignorance during an ongoing pandemic. Sometimes, you just need to take your L and be quiet. HipHopWired Radio