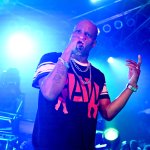 The New York Post is getting slammed on Twitter after publishing a story on the homes DMX lost during his career, just as the rapper is still battling for his life.

CLOSE Source: Adam Bielawski/WENN.com / WENN One of the more notorious tabloid newspapers in the country published a tasteless story about the ailing DMXas hes still fighting for his life in a White Plains, N.Y. hospital. The New York Post published a story focused on the homes the famed rapper lost over the course of his career, prompting many to call the rag to the carpet for its actions. In a post we wont dignify with an actual link to the story, the Posts title of the story read, DMX and the houses hes lost during his rap career and it was met with disdain immediately. Yall trash for this. Dude is in a coma. Mainstream media is not our ally, wrote Omar Cook on Twitter. Marc Lamont Hill wrote in a tweet, What an awful headline and story. Imagine doing something so disgusting as someone is fighting for their lives and journalist Brandon Pope stated, What a despicable thing to publish while DMX is fighting for his life. As has been the story since the weekend, DMX, real name Earl Simmons, suffered a heart attack last Friday and is reportedly on life support as his family, friends, and fans worldwide rally around him in this dire time. There have been premature condolencesposted in honor of DMX, but the family and representatives are allowing the officials at the hospital to properly care for the beloved rapper. The latest rumblings from those close to DMX are revealing that there are reportedly talks among the family regarding how best to proceed as reports of minimal brain activity continue to swirl. Hip-Hop Wired will continue to update our readers on the condition of DMX as they develop. For now, the responses to the New York Posts story on Dark Man X can be viewed below. Photo: Getty 1. This is cruel and unnecessary. The way yall used to be the hottest newspaper in town and now hanging by a thread. There was no reason to do this.