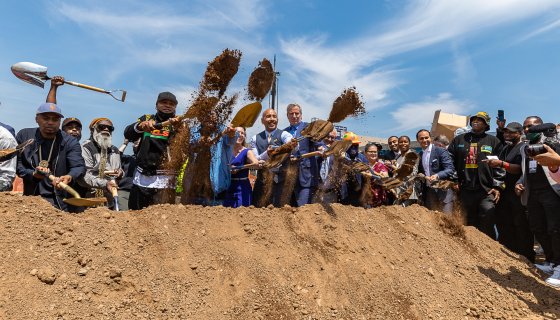 Our culture will finally have a destination where its' rich history will be formally exhibited. Some living legends helped break ground at the Universal Hip-Hop Museum.

CLOSE Source: Sylvester Zawadzki / Universal Hip-Hop Museum Our culture will finally have a destination where its rich history will be formally exhibited. Some living legends helped break ground at the Universal Hip-Hop Museum. Source: Sylvester Zawadzki / Universal Hip-Hop Museum As reported by HipHopDX the build out of the Universal Hip Hop Museum is officially underway. On Thursday, May 20 several Rap icons appeared on site to put shovels to dirt in honor of the sound that raised many of us. At the ceremony were the likes of Nas LL Cool J, Fat Joe Lil Kim, Naughty by Nature, Grandmaster Flash, Slick Rick, Michael Bivins (of Bell Biv DeVoe), Public Enemys Chuck D, MC Sha-Rock, EPMD and more. The event was hosted by Bronx Borough President Ruben Diaz Jr. who was also joined by Assembly Speaker Carl Heastie, City Council Member Diana Ayala and other New York City officials. According to ABC 7Diaz is quoted as saying Its going to be be global destination. Its going to be an economic engine. Nas also expressed how the music shaped his life. It taught me more than schools taught me, believe it or not, he said. Im proud to be here in the mecca of hip hop, the Bronx. Slated for a 2022 completion, the complex will also offer 1,045 affordable apartment units, a theater, education space and onsite eateries. You can get more information on the forthcoming facility at