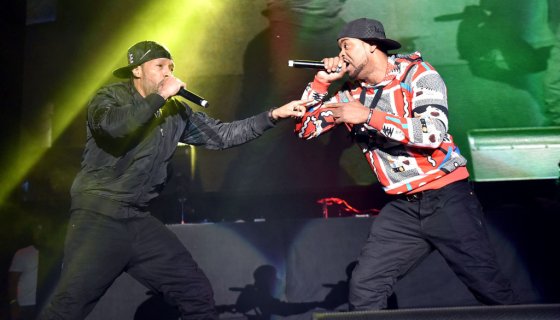 A night of Hip-Hop greatness was ruined for some Verzuz viewers by Method Man and Redman after the duo mentioned Russell Simmons' name and engaged with him during a FaceTime call. Simmons has been under intense scrutiny after he was accused of sexual misconduct by 20 women.

CLOSE Source: Scott Dudelson / Getty Method Man and Redmans 4/20 VERZUZevent would have been perfect if they didnt decide to give this one particular person a call. When it came to the show, Method Manand Redman delivered and showed the duo had not missed a single beat when it comes to rocking a stage together. Hip-Hop fans were blessed to hear live renditions of hits How High, Da Rockwilder, and Dis Iz 4 All My Smokers. There were also special guest appearances from Method Mans Wu-Tang Clan affiliates RZA Inspectah Deck and Cappadonna, and Redmans Def Squad brethren Keith Murray and Erick Sermon. It was definitely a 90s Hip-Hop head dream night of entertainment. The perfect night was ruined for some viewers, unfortunately. The great thing about VERZUZ is the music and the great stories we hear from the artists regarding what inspired their hits and other classic moments. During a break in the action, Method Man and Redman decided to tell the story about Lyor Cohen as one of the many forces bringing them together while reminiscing about their time with Def Jam. While many watched hoped they wouldnt, unfortunately, the artist decided to bring up Russell Simmons name. To make matters worse, Kevin Liles came on the stage to hand them a smartphone with Simmons, who called in during the event via FaceTime. Normally, this wouldnt be an issue, but Simmons, who was in his pajamas and bed at the time during the call, was accused of sexual misconduct by 20 women, including a former Def Jam executive Drew Dixon. Dixon was the focal point of the scathing HBO documentary On The Record that highlights Simmons alleged sexual misconduct. Simmons has been accused of hopping on a jet and fled to Indonesia to avoid prosecution for sexual assault, a claim he denies. The fallout from the ill-timed FaceTime call was swift, with plenty of viewers, mostly Black women, understandably voicing their disgust with the moment. A huge blemish on what was arguably a great night for Hip-Hop. We hope the two artists see all of the criticism they received and learn from it. You can peep more reactions in the gallery below.