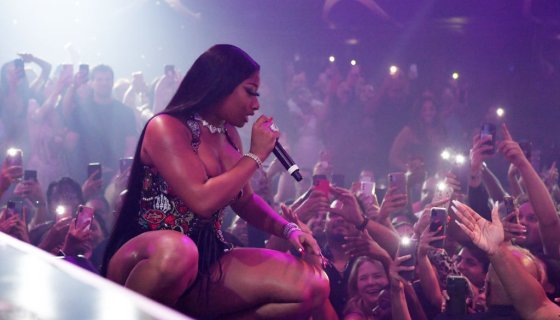 In the feature Sports Illustrated: Swimsuit Issue interview accompanying the amazing cover and tantalizing photos of the Houston Hip-Hop star, she broke bread with legendary supermodel Tyra Banks. She shared that she hid her desire to rap from her mom.

Megan Thee Stallion oozes confidence, but there was one point in her life she wasnt so sure about becoming a rapper. The leader of the hot girls should still be on a tremendous high after confirming she landed the cover of Sports Illustrated Swimsuit Issue making her the first rapper to do so. In the feature interview accompanying the amazing cover and some tantalizing photos of the Houston Hip-Hop star, she broke bread with legendary supermodel Tyra Banks. She shared that she hid her desire to rap from her mom. My mom was a rapper, Meg opens up. She didnt know I wanted to be a rapper, but I would literally watch her in the studio all day. Im like, This lady is everything. I didnt want to tell her that I could rap until I was eighteen. I wanted to be perfect to her. The rapper, born Megan Pete, lost her mother tragically to cancer in 2019. She broke down to Banks how she would hide the fact she was going to the studio out of fear of her mom thinking she wasnt taking rap seriously. I was like, Okay, Ive probably held this secret in long enough, she said. I started going to the studio by myselfI didnt want to shut me down. I didnt want her to say, Youre not serious about this. Megan also told Banks that she was initially nervous about cursing in front of her mother while spitting her bars. I was like, Okay, Mama. Dont whoop me, but Im about to curse, okay? So, I started going off, and Im cursing, she said. Other topics touched on during the pow-wow session include the ladies touching on being confident about their bodies and Tyra asking Thee Stallion about accomplishing a lifelong dream by being on the cover of Sports Illustrated. You can watch the entire interview below.