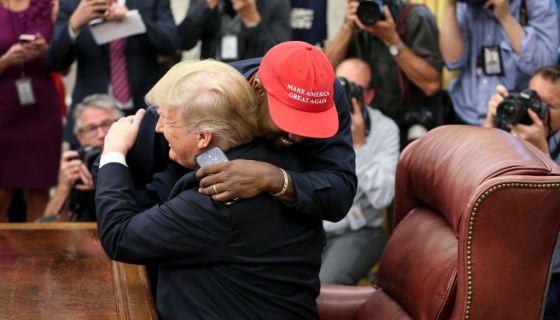 Was it worth it? People who ask Kanye West that question about his allegiance to Donald Trump got their answer when it was revealed the rapper's net worth grew by 37,000% during Trump's presidency.

Source: Consolidated News Pictures / Getty W as it worth it? The people who have been asking that question to Kanye Westabout his allegiance to Donald Trumpfinally got their answer on Wednesday after it was revealed that the troubled but talented artist accumulated personal wealth at a rate thats unheard of during the former presidents only term in office. Bloomberg published an article Wednesday tabulating Kanyes assets and estimated his net worth at an eye-popping $6.6 billion. That would not only make Kanye the wealthiest Black American alive but also the wealthiest Black person in American history. That huge net worth is due in no small part to his forays into corporate fashion with his own signature Yeezy line through Adidas as well as the Gap, both of which combined make up the bulk of Kanyes net worth with a value of up to $4.7 billion. By contrast, Kanyes music catalog the medium through which we all came to know the gifted musician is worth a relatively minuscule $110 million. What makes this financial accomplishment even more impressive is the fact that it really wasnt that long ago when Kanye was broke. He was in the hole for $53 millionof personal debt in 2016, chalking up his losses to spending gratuitously on failed business ventures like his Pastelle clothing line that never took off as well as a separate eponymous fashion label for womens clothing. Enter Donald Trump, who at the time was running for president. After Facebooks Mark Zuckerberg rebuffed a solicitation to invest $1 billioninto the rappers ideas, Kanye jumped at his next best option: the MAGAmovement. Kanye West and President-elect Trump talk at Trump Tower after meeting on Dec. 13, 2016. | Source: TIMOTHY A. CLARY / Getty His bipolar disorder aside, at the time, everybody thought he had lost his mind for trying to cozy up to Trump. But their mutually beneficial relationship flourished and so did Kanyes net worth, beginning the following year in Trumps first full year in office when the president enacted his unfair tax cutsthat greatly benefitted the wealthy. It was likely through those tax cuts that Kanye was able to exponentially grow his net worth to such large proportions so quickly. For perspective, Kanyes net worth was estimated at $18 million in 2016 Now, just five years later, his net worth has ballooned nearly 37,000% to the $6.6 billion estimated by Bloomberg. The only people experiencing that type of wealth growth are seemingly billionaires, especially during the pandemic Source: Bloomberg / Getty Once it became apparent that Trump was probably going to lose the 2020 election, Kanye severed ties with the president The optics behind the break between them suggested that Kanye already got what he needed out of the deal namely, getting out of debt and securing his financial status for life. It also suggests that Kanye had ulterior motives when teaming up with Trump, something weve seen other rappers do, as well. Lil Wayne endorsed Trumps campaign for re-election and got rewarded with a presidential pardon, for instance. But theres been little talk about Trump from Wayne since. Trump was a way to a means for Kanye, Wayne and so many others while everyday civilians were left to suffer the ramifications of their endorsements of such hatred. This is America.