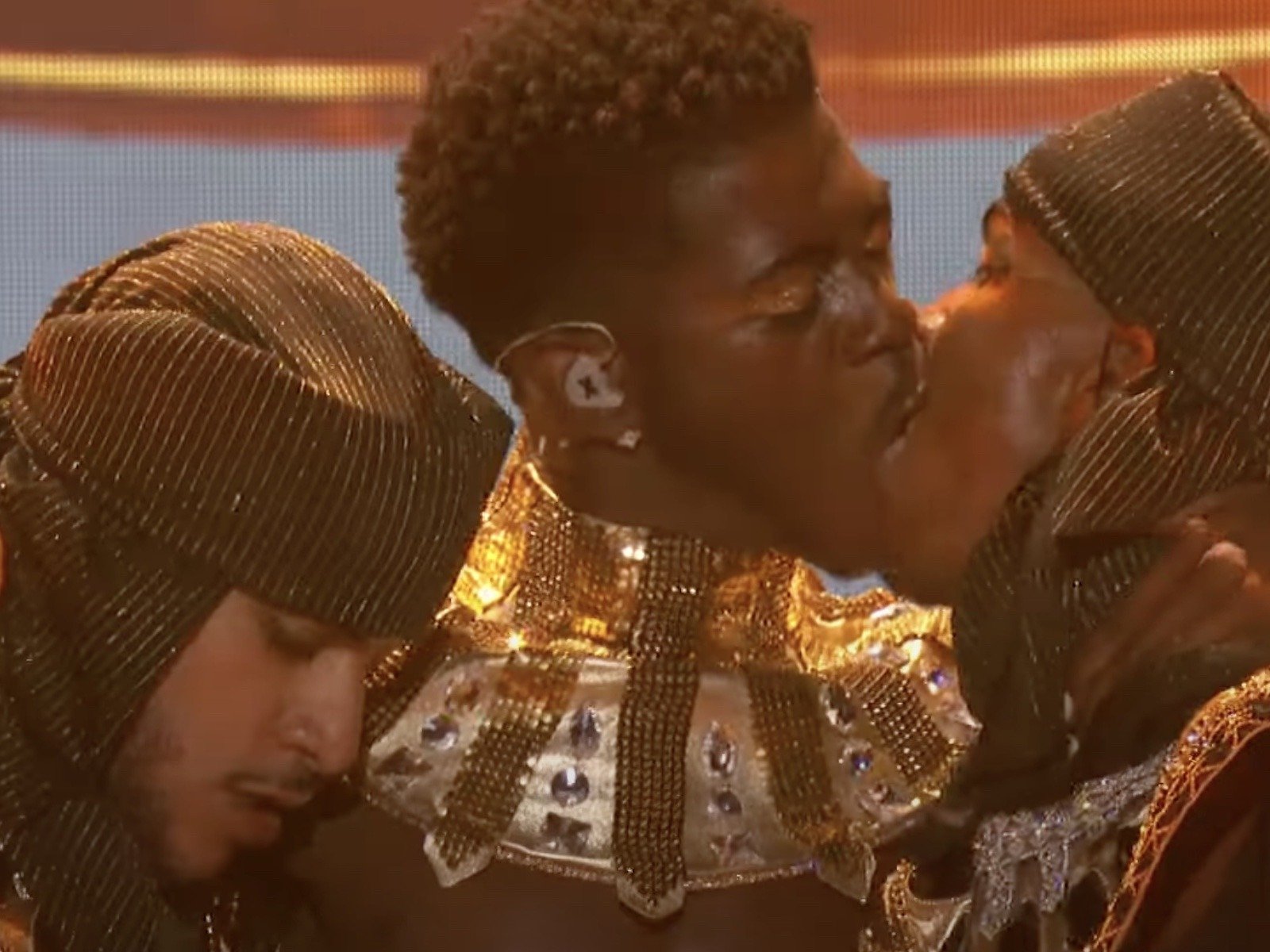 Southern rapper Lil Nas X is making sure everyone knows his sexuality and is ending PRIDE month with a major bang. The hip-hop superstar delivered an epic 2021

Share Lil Nas X Makes Out During BET Awards Set The rap heavyweight put together a breathtaking performance of his MONTERO (Call Me By Your Name) set. In addition to taking some clear motivation from late pop icon Michael Jacksons Remember The Time music video, Xs biggest moment in addition to some epic-looking choreography came at the end of the clip when he locked lips with one of his on-stage performers. The eye-opening set and closing moment ignited a flurry of YouTube reactions with people embracing an openly gay Black man taking over the awards show. Watching this on TV with my family was awkward to say the least His braveness is MONUMENTAL and COMMENDABLE. People get murdered for what hes brave enough to do. I hope he realizes how incredible he is for the path hes carving. Okay lets just point out that a OPENLY gay black male is performing at the BET awards. I love it. That MJs Remember the time dance breakdown was liiit My parents were horrified watching this and I was like YASSSSSSS KING Lil Nas X Has Crazier Ideas In His Head In a recent interview, X didnt hold back on thinkingbigger and better than his most recent music video drops. Nas said he planned to keep the momentum going and deliver an even more jaw-dropping visual than his recent MONTERO and Sun Goes Down visuals. The 22-year-old is set to release a new album, Montero, this summer. He has already laid the foundation for his debut with two successful singles, including the tender Sun Goes Down. He anticipates his next release will bring something new. I want to do something in a different lane thats crazier, Lil Nas X said of what he envisions for his next music video. Im not sure what yet But thats for when I make a main single or something. ( ) Lil Nas X Overcomes Painful Prom Night In May 2021, X dropped his Sun Goes Down music video to the masses The Take A Daytrip, Omar Fedi and Roy Lonzo-produced must-hear comes packed with all types of signature Nas sounds. But he takes things over the edge going with dark thoughts and feelings of non-acceptance while growing up and coming into himself. In the inspirationalvisualfor his latest single, a meditative Nas reflects on his life and meteoric rise before time traveling back to 2017 to visit his younger self. A teenage Nas was someone whos struggling inside, hating himself & doesnt want to live anymore, and his adult self arrives to assure him that theres light, and acceptance, on the other side if he just accepts himself first. The cinematic visual, which includes a cameo from Nas father R. L. Stafford, follows Nas from his actual old job at Taco Bell, into the lonely hallways of high school and through an emotional night at prom. The video concept was created by Lil Nas X himself, and he also co-directed the visual with Psycho Films. The video also features a scholarship winnerwith direct connections to Xs life journey. As part of a larger partnership with Taco Bell, real-life employee and Shift Supervisor Andrew German is also featured in the video. This was a dream for Andrew, who recently won a $25,000Live Ms Scholarshipfrom the Taco Bell Foundation to pursue his passion for dance and sees Lil Nas Xs path from burritos to Billboard charts as an inspiration. Lil Nas Xs Sun Goes Down A few days prior, X hit up his social media pagesto get followers hyped. Without providing much context, Lil Nas said his new anthem would drop this Friday. SUN GOES DOWN 521 PRESAVE LINK IN BIO