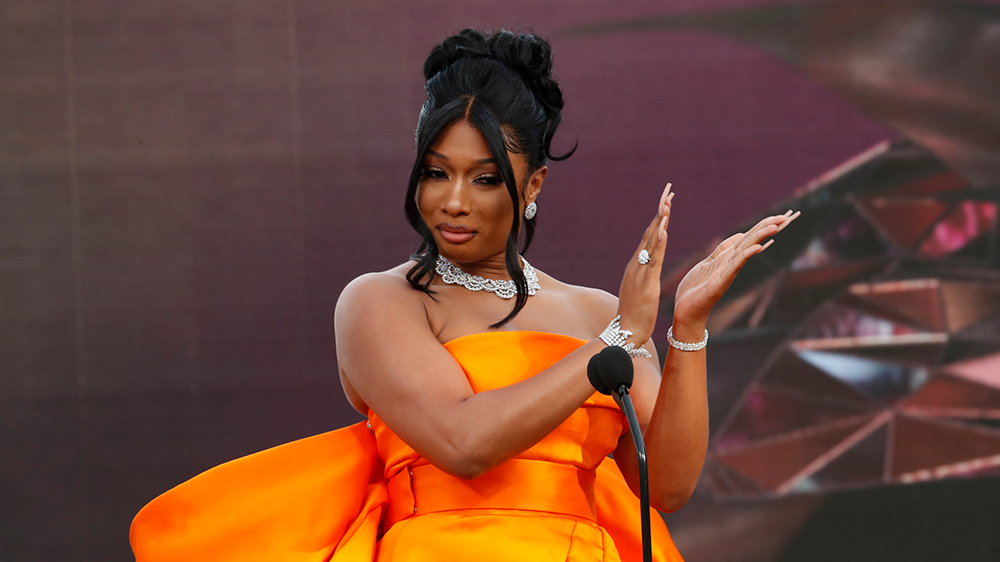 A look at who or what fared best and worst at the Grammys, from Megan Thee Stallion and BTS to the return of wide lapels to the ratings.

See All Cliff Lipson/CBS Sunday nights Grammysare still all the buzz among music fans and the industry something you wouldnt guess from a glance at the (predictably) dismal overnight ratings, but the people who cared about the show really cared about the show. And whats not to care about when youve got Harry not only unmasked but unshirted; a live (or semi-live) reenactment of a police shooting as part of a production number; musics top female hip-hop stars pretending at scissoring on a giant bed; actual live guitar solos; and Beyonceactually showing up at a Grammys and seeming to be happy about it? With no real sweeps to speak of among the official winners Megan Thee Stallion with three awards, came closer than anybody heres a final lingering assessment of some of the individual winners and losers were still bzzzzzz-ing about. Winner: The reviews Bagging on the Grammys is a time-honored annual tradition, regardless, usually, of whether the show is any good or not. Yet this years telecast managed to largely escape the standard withering comments, garnering critical notices and consensus remarks in the twitterverse that ranged from mixed-to-positive (like Varietys review) to flat-out enthusiastic. While everyone naturally had a complaint or three whether it was that Trevor Noah wasnt edgy enough to WAP being too edgy new exec-producer Ben Winston clearly surpassed most expectations for what he could pull off in a first year and/or a pandemic. Loser: The ratings To like the show, you had to have watched it, and that turned out to be a problem. All awards shows are down dramatically, but not every one is down by more than 50% from 2019, when the awards industrys slippage was already showing. Explanation are all over the place: Potential viewers wrongly expected a Zoom show; the near-total emphasis on fresher young acts didnt give the older CBS demographic enough familiar faces to latch onto; or, the whole format is just doomed no matter what anybody does. You can accept any of those rationales, but its really a puzzle: With this strong a lineup, and with recorded music having been on a rebound during the pandemic, youd think fans would want to see some of those beloved stars in the flesh. But it could just be that Roddy Ricchs tens of millions of devotees have just never heard of this strange device called a TV. Winner: Artists who seemed to have stepped out of the 1970s Harry Styles started it straight off, with that glam-rock feather boa, groovy bell bottoms and golden-god leather. But the night was really about lapels. Finneas tuxedo jackets collar should have had its own caution: wide load warning attached. And then came Bruno Mars and Anderson .Paaks new supergroup, Silk Sonic, which apparently intends to devote an entire album cycle saluting not just the Gamble & Huff soul records of the early 70s but the leisure suits that came with them. Loser: Artists who were actually alive in the 1970s The Grammys used to reliably bring out veterans to perform with the more au courant stars, but in this years lineup, 31-year-old Taylor Swift almost counted as a grande old dame. Bringing in John Mayer as a guest guitar soloist during Maren Morris segment was this very youthful editions equivalent of having AC/DC on, or Tony Bennett. Winner: The dead If youre an older performer who is not Lionel Richie, the Grammys didnt have much use for you this year. But if you were/are dead, they did you right. At least, there was a generally positive reaction to an In Memoriam segment that bundled together the traditional scrolling of the deceased with several live tributes that in the past would have been scattered across different parts of the show. Brandi Carliles cover of John Prines I Remember Everything provided one of the telecasts few emotional moments, Richie was the right man to eulogize Kenny Rogers, Bruno Mars got even more likes for becoming Little Richard than he did for becoming a 70s soul man, the spotlight on a guitar for Eddie Van Halen worked (even if Wolfgang Van Halen disagreed), and Brittany Howards rendition (with Chris Martin) of Rodgers & Hammersteins Youll Never Walk Alone was received as a knockout even if it was strange that she was saluting Gerry & the Pacemakers version, a recording that never even charted in America. The producers were also wise to make as big as possible a point of directing viewers to an online list of 700-plus decedents that didnt fit on the telecast though that would never completely stop the outrage over those not put on the air, which is everyones favorite aggrieved after-party following almost any awards show. Winner: Oral sex Between Styles Watermelon Sugar and Megan Thee Stallion and Cardi Bs unexpectedly ready-for-prime-time WAP, it was clear that the ratings were far from the only thing going down at this years Grammys. Loser: Envelopes Maybe the Grammys should have had someone licking envelopes, instead of putting such durable stickers on them, because everyone from