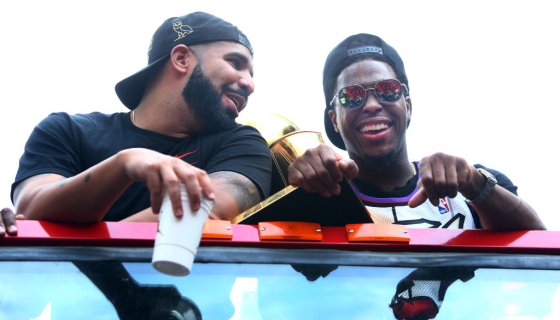 Kyle Lowry s name continues to be the subject of trade discussions, speculation has grown that the Toronto Raptors point guard will be dealt to the Philadelphia 76ers, Miami Heat or Los Angeles Lakers. During what could be his last presser as a Raptor, Kyle Lowry actually took a FaceTime call from non other than the King of The North himself, Aubrey Graham a.k.a. the Certified Lover Boy a.k.a Drake. The Global Ambassador for the Toronto Raptors called in while Kyle was taking questions from the media and let the media know Guys, we have a special guest here. Drake wasted no time immediately inserting himself into the conversation by stating If you guys have any Im here to translate. Im his translator. We didnt know Kyle needed a translator, but it was nice for Drizzy to offer his services. Kyle couldve played along with it for the sake of comedy, but decided to keep things straight forward No youre not. No Ill hit you when Im done, bro. Kyle Lowry answered a FaceTime from @Drakeduring his post-game presser.