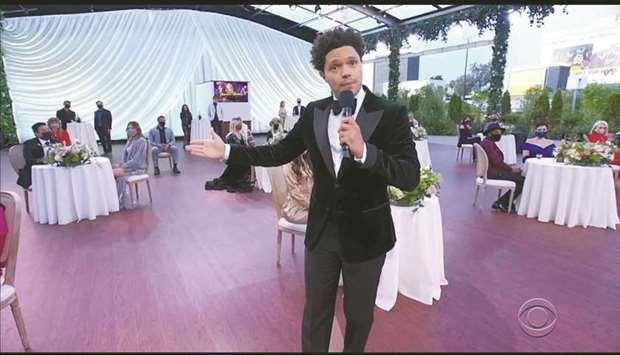 Taylor Swift and Billie Eilish took the top prizes at the Grammy Awards on Sunday, but Beyonce was the big winner on a history making night marked by multiple wins for women. Beyonce's four Grammys on Sunday two of them shared with best new artist winner Megan Thee Stallion took her total career wins to 28, surpassing the previous Grammy record for

Tweet on Twitter (MENAFN - Gulf Times) Taylor Swift and Billie Eilish took the top prizes at the Grammy Awards on Sunday, but Beyonce was the big winner on a history making night marked by multiple wins for women. Beyonce's four Grammys on Sunday two of them shared with best new artist winner Megan Thee Stallion took her total career wins to 28, surpassing the previous Grammy record for a female artist set by bluegrass singer Alison Krauss. Swift's surprise record Folklore, recorded during coronavirus (Covid-19) lockdowns, was named album of the year and made Swift, 31, the first woman to take home that prize three times. In a socially-distanced ceremony of live and pre-recorded performances, the writers of I Can't Breathe by R & B artist H.E.R won song of the year. It was written in response to the Black Lives Matter protests that roiled the United States last summer following the police killing of George Floyd. 'I didn't imagine that my fear and that my pain would turn into impact, the musician said in accepting her trophy. The ceremony, which fell nearly a year to the day after the coronavirus pandemic grounded tours and forced performance venues to close, stood as a concerted effort by the music world to try to move past a crushing 2020 by celebrating its biggest stars. And there is perhaps no one bigger than Queen Bey, whose Best R & B Performance award for her summer track Black Parade, an homage to Black power and heritage, sent her into the Grammy record books. It was not even clear initially that Beyonce would attend the event, when she did not Zoom in to accept her first trophy of the day, which she shared with her daughter Blue Ivy, for best music video for Brown Skin Girl. But she set social media alight when she was spotted in the audience and then took the stage alongside Megan Thee Stallion to accept their prize for Best Rap Song. 'As an artist, I believe it's my job and all of our jobs to reflect the times. And it's been such a difficult time, Beyonce said, with her husband Jay-Z looking on, as she received her history-making award. 'So I wanted to uplift, encourage, celebrate all of the beautiful black queens and kings that continue to inspire me and inspire the whole world. Megan Thee Stallion, 26, known for promoting women's empowerment, came away with two more wins for her single Savage, featuring Beyonce. Eilish's ballad Everything I Wanted won record of the year, and the 19-year-old also won for her theme song for the upcoming James Bond movie No Time to Die. Eilish said she was embarrassed by the win, saying it should have gone to Stallion. 'You deserve it. Genuinely. Can we just cheer for Megan Thee Stallion, Eilish said. British singer Dua Lipa won best pop vocal album for her dance-y Future Nostalgia and spoke of the value of music during hard times. 'I'm just so grateful and so honoured because happiness is something that we all deserve, Lipa said. Hosted by Trevor Noah, the ceremony was packed with pre-recorded and live performances by the likes of Lipa, Swift, Post Malone, DaBaby, Black Pumas, and Mickey Guyton. Cardi B and Stallion teamed up to perform their summer single WAP in one of the raunchier moments of the evening. It took place both indoors and outdoors in Downtown Los Angeles but mostly without the elaborate sets and special effects that traditionally mark the highest honours in the music business. 'We're hoping that this is all about what 2021 can be, full of joy, new beginnings and coming together. Never forgetting what happened in 2020, but full of hope for what is to come, Noah said. Some of Sunday's awards were announced at small venues in cities like Nashville, New York and Los Angeles. 'Thank you to the Grammys for putting this together and letting us, at least, kind of be together, said Miranda Lambert, winner of best country album for Wildcard. K-Pop band BTS lost in the best pop duo or group performance against Lady Gaga and Ariana Grande for their single Rain on Me, but performed their hit English-language single Dynamite from South Korea at the close of the show. The seven-member band from South Korea had been hoping to be the first K-Pop act to win a Grammy after a breakthrough year in the United States for the genre. Brittany Howard known for fronting the band Alabama Shakes won Best Rock Song, as Fiona Apple scored two awards for her album Fetch The Bolt Cutters, which many critics hailed as a masterpiece. Though most of the rock fields were unprecedentedly dominated by women, The Strokes won for Best Rock Album for The New Abnormal, their first Grammy ever. Rap legend Nas also won for the first time after 14 nominations, with his King's Disease winning Best Rap Album. And Nigerian superstar Burna Boy scored his first trophy for Best Global Music Album, ecstatically accepting the prize which he said 'is a big win for my generation of Africans all over the world. But it wouldn't be the Grammys without controversy. The Weeknd has pledged to stop subm