A$AP Rocky Calls Rihanna The Love Of His Life 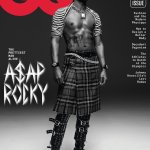 A$AP Rocky is a Hip-Hop star who routinely drops dope music and sparks fashion trends. But all people will be talking about today (May 19) is his declaring that Rihanna is the love of his life.

A$AP Rocky is a Hip-Hop star who routinely drops dope music and sparks fashion trends. But all people will be talking about today (May 19) is his declaring that Rihanna is the love of his life. Pretty Flacko made the confession in GQ for which he graces the mens fashion magazines June/July 2021 issue. The story is full of interesting details about The Harlem rappers tastes and eye for fashion, his time imprisoned in Sweden until an opportunistic then President Donald Trump helped get him released (He didnt helphe made efforts and he rooted for me to come home, but he didnt free me, says Rocky), his collaborating with Parisian designer Marine Serre, and more. But youre probably here to see what he said about his girlfriend, the certified iconic Rihanna, and GQ got him to dish on their relationship for the first time in the press. When the interviewer brought up her name, he notes that Rocky started smiling and called her, The love of my life, as well as My lady. We must also note that the narrator says that Rocky was admittedly high at the time, and if the timeline is as presented, he may regret speaking on the relationship considering his girlfriend is notoriously private. Basically, the guy might be in trouble since that factoid has been trending ever since the story was published. But, the Peso rapper didnt offer much more details, so we dont think it will be a deal-breaker. Whats it like to be in a relationship? So much better, Rocky replies without hesitation. So much better when you got the One. She amounts to probably, like, a million of the other ones. New-world shit, indeed. Rocky is among our cultures most unabashed ladies men, but he says hes comfortable embracing monogamy: I think when you know, you know. Shes the One. Read the full interview with Pretty Flacko, which covers much more than his relationship with Rih Rihhis new album is tentatively called All Smiles